It was the wedding of the year on Thursday 28th July 2016 at the Vermont Hotel in Newcastle. I had the honour of not only being bridesmaid for my best friend Tor, but also to make her wedding cake. This is my first ever wedding cake, so a lot of faith was placed in me. Tor had a great vision for the cake and I was really excited (and nervous) to take on the challenge.


For those of you that follow me on Instagram, you may have seen me trialing bakes for the wedding cake in the past couple of months. The 5 wedding cake tiers were a 12" fruit cake, 10" chocolate cake with caramel icing, 8" Victoria sponge, 6" carrot cake with cream cheese flavoured buttercream, and a 4" lemon cake. I've never made fruit, chocolate or Victoria sponge cakes as big as this before. So trial runs of increasing my usual recipes were needed before hand. I also bought 2 sets of cake tins for the job, so these needed testing too.

The fruit cake was the first thing to do months before the wedding. I tried the best fruit cake at at friend's wedding last year and had to get the recipe. I found out it was Delia Smith fruit cake recipe, so had to try making it for myself. I made a couple of fruit cakes and fruit cupcakes and they went down well at Christmas. There isn't a recipe for 12" round fruit cake available. So, after consulting forums and with the help of Delia Smith scaling up cake recipe, I decided to double the 9" recipe for my 12" cake. This works well, but if you want a really deep cake, you should try scaling it up differently.

I held a cake tasting for Tor and Chris in April; where they sampled some cakes in the flavours they wanted. Chocolate, Victoria sponge, carrot and lemon cake.

I couldn't believe how quickly the wedding came round. As soon as school broke up for the summer holiday on Wednesday 20th July 2016, I got cracking on with the baking of the cakes. All except the fruit cake which was already done in advance and maturing from several brandy feeds. I had a full week off work dedicated to the making and decorating of the wedding cake. I needed this and couldn't have done it otherwise.

There were two chocolate cakes to choose from. A Be-Ro and Primrose Bakery one. Tor and Chris both liked different ones but in the end went for the latter. I used this Chocolate and caramel cake recipe and trebled the cake recipe over three 10 inch round tins. The caramel icing recipe sufficed to sandwich the three cakes.

In the past I have always used the Be-Ro recipe for Victoria sponge with good results. However, my recent test bakes kept failing. So, I decided to try and go with a different Victoria sponge recipe. I tried Primrose Bakery's recipe and this was successful.


I used this Carrot cake recipe, which always yields good results. The recipe works over two 6 inch round tins. I wanted to find an alternative to cream cheese icing, as was worried it may go funny being left out of the fridge for as long as it would be. I came across Lorann oils and was intrigued to try the cheesecake and cream cheese flavourings, as have never seen these before. Neither tasted like what they professed to be. They just tasted very sickly sweet. However, if you add a tiny amount and let the flavour settle in the buttercream overnight; it is pleasant and does go well with carrot cake. I went with the cream cheese flavouring in the end.


I haven't had the best of luck with finding a good lemon cake recipe in the past. I've tried several recipes; some even from reputable popular bakeries. But always ended up with a horribly dry and tasteless cake. It's as if the lemon juice sucks out all the moisture and flavour of the cake when it cooks. Anyway, I turned to my mother-in-law Sandra (Sandra's Pantry) for her lemon cake recipe. She uses the Be-Ro Victoria sponge recipe with some 'family secret' tweaks. This was a vast improvement on my previous attempts.


It was blazing hot the week before I started the wedding cake. The worry was, will the buttercream melt causing structural issues? Or, will the fondant be a nightmare to work with as it's so hot, cracking at every opportunity? Luckily, the weather cooled down a little when it came to frosting and covering the cakes with fondant. I'd just got a Honeywell tower fan from my parents for our anniversary. This was put to good use and came in handy to keep the cake (and me!) cool. 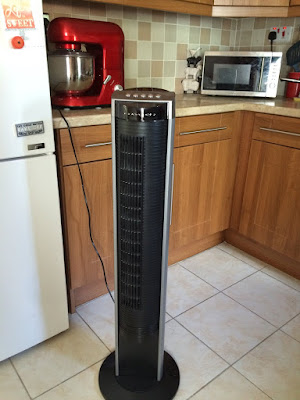 You know it's serious when your shopping includes a 25kg bag of icing sugar, 10kg of fondant and a litre of vanilla extract! All bought from Tom Anderson Distributor in Benton.

I used two boxes of 5kg Tom Anderson's brand of supreme ivory fondant. I didn't use it all but one box wasn't quite enough. I covered the 4 cakes (other than fruit cake) with double the fondant to try and get a smoother finish and in hope it'd help keep the cakes together more. Initially, a few of my first tries of covering the smaller cakes were complete fails, so had to throw some out. I thought it'd be easier to start small and work my way up in size. If it weren't for this and I didn't do double the fondant on 4 cakes, then 5kg would have definitely been enough. My palms, wrists and forearms were red and sore after all the rolling! I need more practice to get the hang of it and to get a smoother finish. 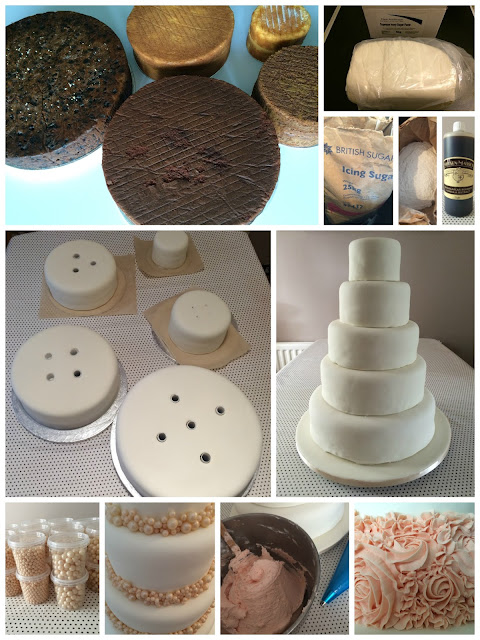 I had never used dowels or stacked cakes before. Leigh helped me with the measuring and sawing of the dowels. Considering we had both never done this before, he did a sterling job. We managed to dowel and stack the cake without much problem. If we hadn't done this right, the worry was, would it all hold during the journey to the wedding venue?  I had images in my head of cake tiers sliding off or the lower cakes buckling under the weight of above cakes. 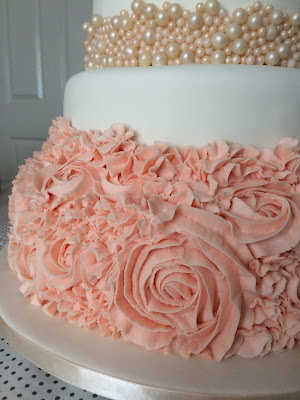 The overall decoration was simple but effective. I loved the dreamy details that Tor chose for the wedding cake. Creamy blush pearls with soft rosy ruffles and rosettes.

I got the edible pearls from The Cake Decorating Company, which were really well priced. The edible pearls (although ready-made) took hours of pain-staking and careful work. I can recommend Renshaw ready-to-use royal icing. Not only did I use it for securing the stacking of the cakes, it also did the job of keeping some of the larger pearls in place. There were occasional pearls that fell and bit the dust but on the whole, they stuck and stayed whilst at home. The worry was, would they all hold for the cake getting delivered?

I enjoy doing buttercream rosettes and was pleased I would get to do them for this wedding cake. I covered a birthday cake in buttercream roses when I first forayed into cake decorating a couple of years ago. See here. Its like I've come full circle; from starting with these for a small (fun) bake to my first ever (serious) wedding cake order!

These are fairly easy to do with the right piping nozzle (Wilton 1M) and a bit of practice. They're very quick to do compared to the pearl decoration. I wasn't sure whether the buttercream ruffles and rosettes would stick to fondant as never done this before. I decided to cover the fondant in a layer of buttercream first and it seemed to work. Easiest job so far. Now the worry that they may melt and not hold between now and the big reveal. 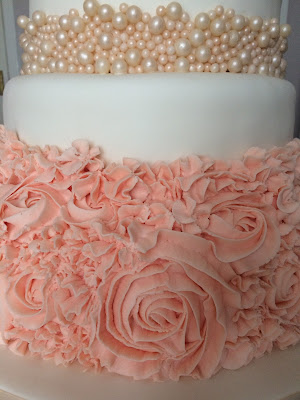 
The wedding cake survived the car journey. It was a tense one! But nothing budged. And it was actually seamless getting it from car to cake table. It also lasted over-night at the venue before the big day.  Nothing melted nor any repairs were needed. I did have a cake repair kit on hand in case though! I needn't have worried as much as I did but the stress was down to lack of prior experience.

It isn't perfect but it is my first wedding cake. A lot of time, effort and love went into it. I learnt a lot about what goes into a wedding cake from scratch; start to finish. Preparation is key. Don't be like me and rush to Tesco for marzipan at 11pm! Experience helps too. I definitely feel more prepared and confident in my abilities for the next one.

The bride & groom, family, friends and guests loved the cake. I did not expect the wedding cake to receive the reception it has. I was thrilled and am bowled over from lots of lovely compliments (throughout the wedding and afterwards on social media). I am really proud of what I've achieved. Thank you everyone for all the cake love and appreciation.

Congratulations Tor and Chris, the new Mr and Mrs Robertson! Thank you again for having me as part of your wedding. It really was an honour and pleasure. Love you xx 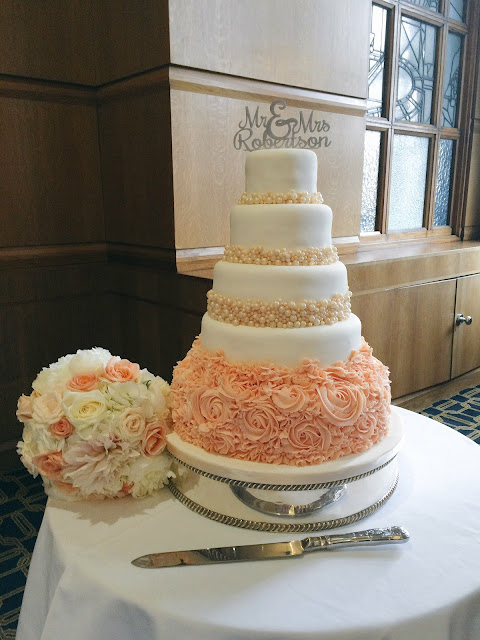 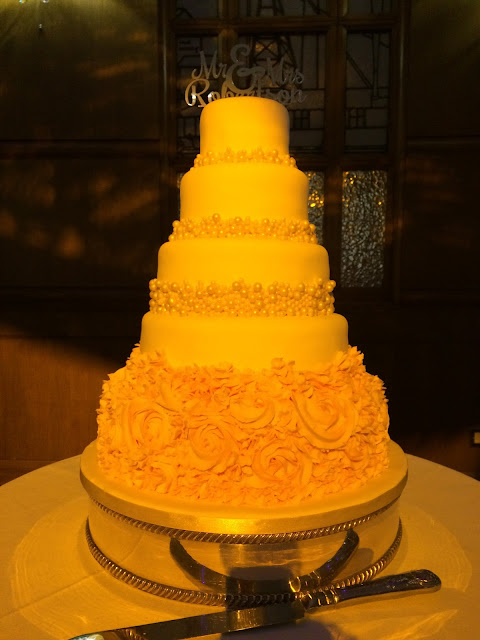 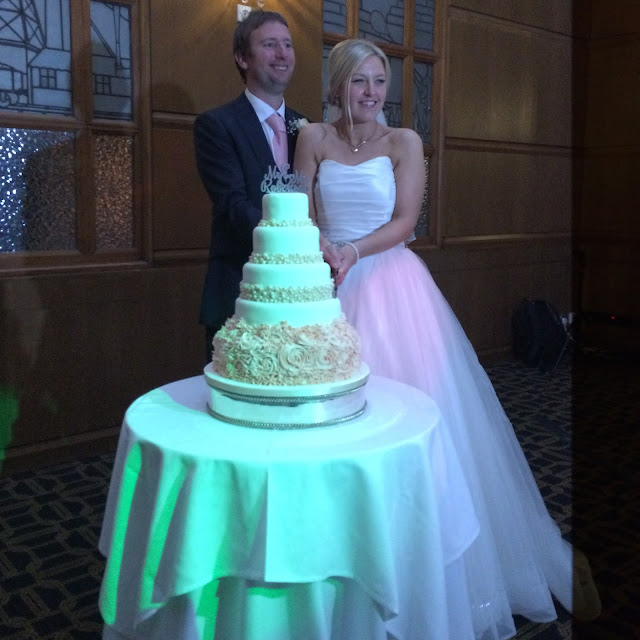 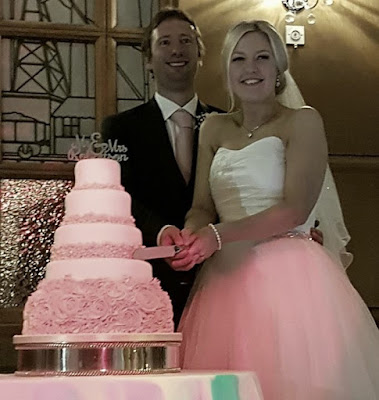