At the end of March, I had a request to make a birthday cake for Leigh’s work colleague Rob. At which, I jumped at the chance. Any chance to bake and share my baked goodies ;-) This was my first birthday cake I have made and I'm sure wont be the last!

I also took the opportunity to use my stand mixer for the first time. I have been wanting one for ages, and in particular a Kitchen Aid. But I always held off as they’re so expensive. My dad’s place of work was getting rid of their Kenwood industrial stand mixer and my dad asked if I wanted it. I was made up :-) Whisking egg whites have never been easier! 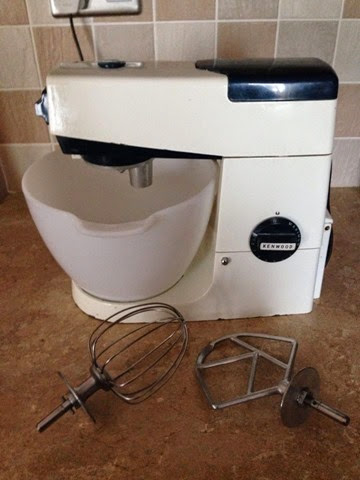 Rob had requested a chocolate and caramel cake. This was perfect as I have made caramel buttercream icing before (see recipe here) and there was a chocolate layer cake recipe that goes with it (from the same Primrose Bakery book). The combo goes brilliantly together. Rob and colleagues enjoyed this celebration cake and Rob said it was “beautiful” :-)

I used 500g of cake batter for each layer and managed to make 6 cupcakes, as well as a 3 layer chocolate cake. If you don’t want cupcakes, just put more cake batter divided evenly between the tins. I also baked the cakes for less time than the recipe stated. I would test if the cakes are cooked 10 minutes before end of recommended cooking time. Keep testing and remove from oven once cooked. I ended up cooking mine for 10 minutes less. Longer and the cake would have been really dry. 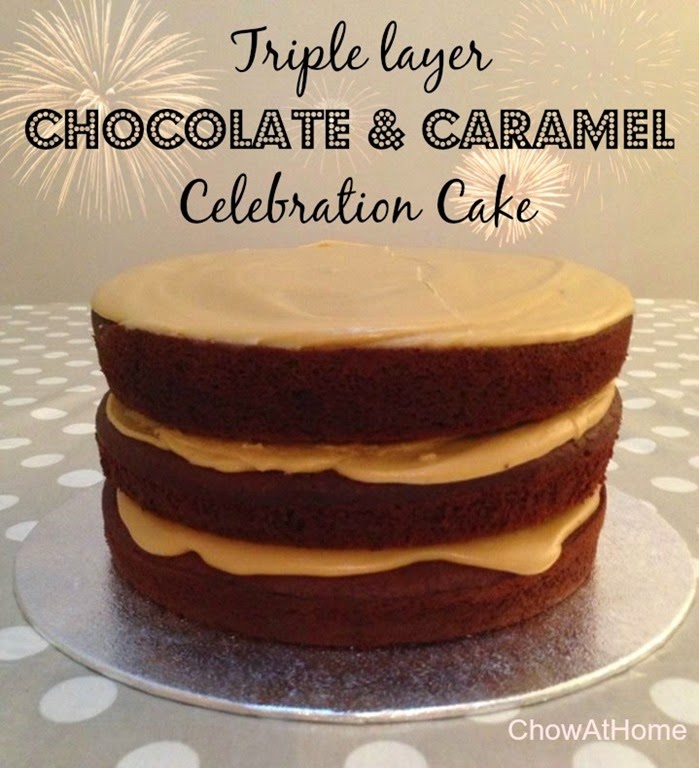 For the chocolate cakes: 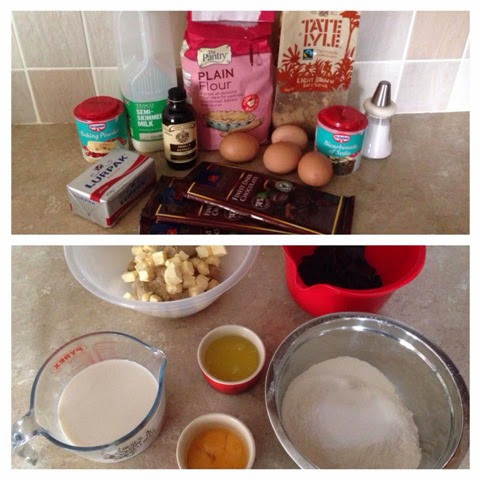 Method
1. Preheat the oven to 190°C.
Grease and line 3 x 20cm sandwich cake tins with baking paper.
2. Melt the chocolate:
you can do this in a heatproof bowl over a saucepan of simmering water on the hob,
but the easiest way is in the microwave -
place the chocolate in a microsafe bowl and heat for 30 second intervals,
stirring after each 30 seconds until melted.
3. In a bowl, cream the butter and sugar together using an electric mixer, until pale and smooth.
Slowly add the egg yolks and beat well.
Next, add the melted chocolate and beat well again.
4. Sift the flour, baking powder, bicarbonate of soda and salt into a separate bowl and stir together.
5. Measure the milk into a jug and stir in the vanilla extract.
8. Gradually add alternate amounts of flour mixture and the milk to the chocolate, butter and sugar mixture, beating well after each addition.
9. In a clean bowl and using a clean whisk, whisk the egg whites until stiff peaks have formed.
Then using a spatula, carefully fold the egg whites into the main batter until it is all combined.
10. Divide the  batter evenly between the tins (use between 500g and 600g batter in each tin)
and smooth the tops with a spatula.
11. Bake in the centre of the oven for about 30 minutes,
until a skewer inserted into the centre of one of the cakes comes out clean.
12. Leave the cakes to cool slightly in their tins for about 10 minutes
before turning out onto wire racks to cool completely.
N.B. Un-iced, these sponge cakes can be wrapped in cling film
and kept at room temperature for up to 3 days, or even frozen and then defrosted when needed. 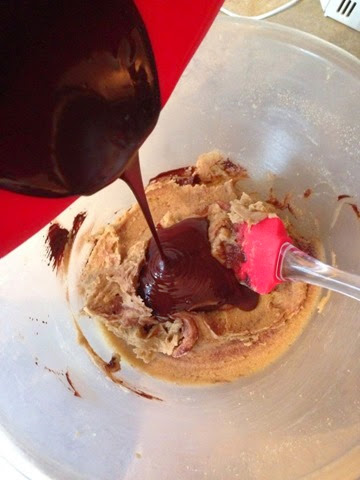 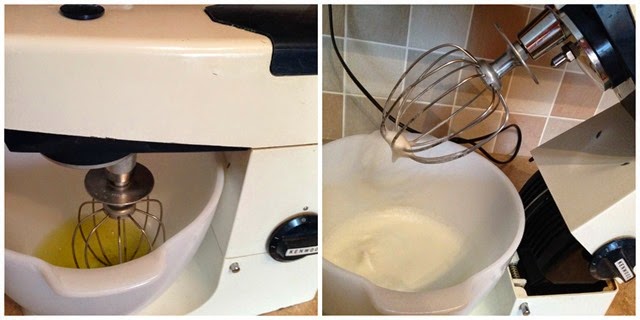 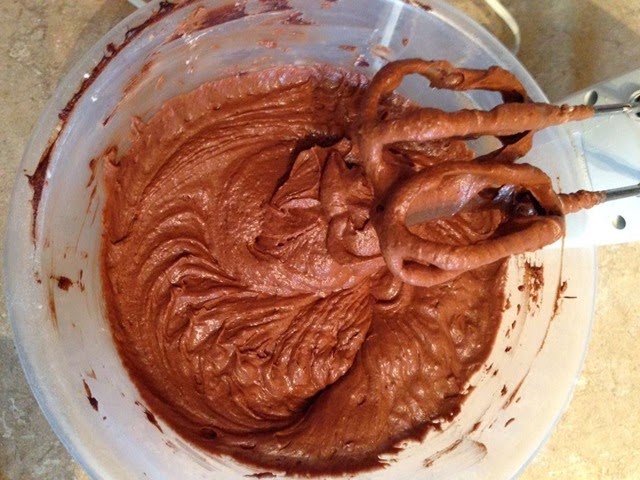 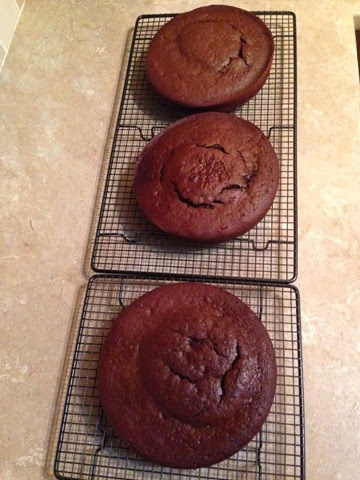 For the Caramel buttercream icing:

1. Combine the butter, milk and sugar in a heavy-based saucepan and put on the hob over a high heat.
Stirring continuously, bring the mixture to a boil.
Allow it to boil for 1 minute, then remove from the heat and stir in half of the icing sugar.
2. Allow the mixture to cool slightly, then add the rest of the icing sugar and the vanilla extract.
Stir until it thickens to the desired consistency. It will have a slightly runny consistency, which works well with the cake.
If you leave it and it starts to set, just transfer to a microwave-safe bowl
and soften it for a few seconds in the microwave before beating again, and if necessary, add a little double cream.
3. Ice the top of each cake with the caramel buttercream icing
and allow it to set a little before sandwiching the cakes together and serving.
N.B. If you leave the icing to set for too long, it will be more likely to crack when assembling the cakes. 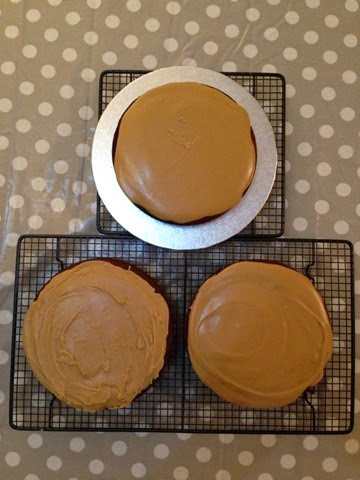 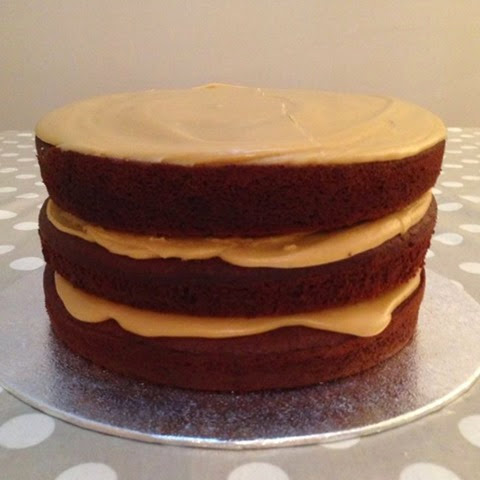 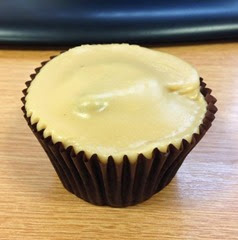