I’ve been wanting to write a post about The French Oven for a while now. Here, you’ll read my highs, a low and great customer service from this artisan bakery.

I first came across French Oven at Tynemouth Food Festival in May 2015. See my brief Facebook post about Tynemouth Food Festival 2015 here. A friend of a friend recommended that I try the Beetroot sourdough. I was intrigued and excited at the prospect, as never had beetroot in a bread, never mind a sourdough before. Unfortunately, by the time we got there in the afternoon on the first day, they had sold out. Good thing we’d already planned to go to the second day of the food festival. So, the next day, we went straight to the stall bright and early and secured a beetroot sourdough.


I’ve had sourdough bread before so thought I had an idea of what to expect from this beetroot sourdough. It completely blew me away. Any expectations I had, it exceeded. The bread was so soft, light and fluffy with delicious earthy flavour running through. It is a beautiful sight to behold. Gorgeously speckled with purpley-pink gems throughout. It was the best bread I had ever eaten. I can only wonder and look on in awe at how French Oven managed to get their bread to be as soft as clouds. It wasn’t like any sourdough I’ve eaten made before. It wasn’t characteristically dense, holey, chewy and slightly sour. But whether it met any criteria to resembling a sourdough, I didn’t care, as it was utterly scrumptious! I don’t think I’ve ever felt so passionately about a bread (that wasn’t made by myself) before! I can’t praise it highly enough!


I do enjoy a cheese board and this beetroot sourdough improves one no end!


Ever since I finished eating this loaf, I’d been dreaming of my next loaf. A month later in June, I finally made it out to town to The French Oven bakery in Newcastle’s Grainger Market. 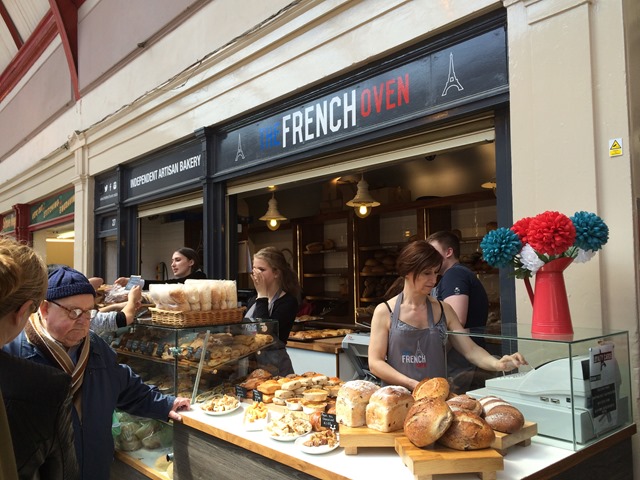 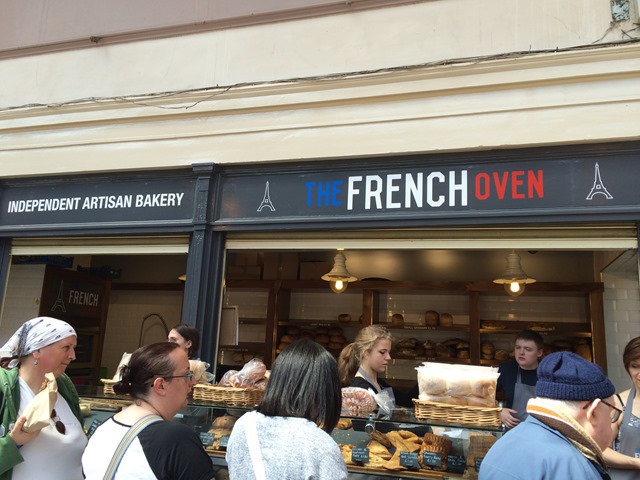 I was really chuffed when I got my second beetroot sourdough. My cousin Carine on my recommendation purchased two. She got one for herself and one for our aunty.


You can see why I was surprised and extremely disappointed when I sliced into this second loaf and it was undercooked! All my highest of high expectations were crushed. I tried eating a slice but it was stodgy, raw and inedible. With great sorrow, I had to throw it in the bin. I felt even worse as had recommended it to Carine who had bought two! I’ve never bought anything before that has been so badly baked.


Honestly, I didn’t know what to do. I believed that this wasn’t French Oven’s standard fare nor reflected their high standard (that I’d discovered and love). I didn’t want to ‘complain’ as didn’t want to appear nasty. I had recently joined Twitter and found I could contact French Oven privately on there. I’d rather do that then tweet publicly about it. I only wanted to make French Oven aware of what had happened and did not expect anything in return. The owner John responded and apologised for the undercooked batch explaining it was the first time in two years. He then offered me a refund/replacement and a goodie bag as compensation. My cousin Carine was also offered the same compensation as me. This was very kind of him, as an apology and refund would have been enough. To go the extra mile and offer a goodie bag shows great customer service. I opted for a replacement rather than a refund of the beetroot sourdough as felt, it deserved another chance, after being so brilliant the first time round.

I arranged with John on Twitter when I would be round in mid-July. I was assured that it would be sorted for me and ready when I got there. When, I got to the bakery, none of the staff knew what had been arranged. I explained the situation and offered to show the private Twitter messages conversation between myself and John. This wasn’t necessary and after initial confusion, a staff member bagged up a beetroot sourdough for me and then proceeded to offer me a choice of any of their breads. They have a huge choice of savoury breads with unusual additions like black pudding. This was tempting but I decided on a Brioche, as wanted to try their sweet breads after trying a savoury one. I was then asked if I would like to try one of their pastries. There were so many to choose from that it was a little overwhelming, so I asked the staff which one they would recommend. Do I eat meat? Yes, definitely. A staff member recommended the Pork & plum chutney pie.


The pork & plum chutney pie was still warm and inviting when I got home, so of course, I had to eat it straight away. The breads could wait till later!

I was pleasantly surprised with the pie filling. I didn’t expect there to be so much of it but it worked. As well as being generous, my mum commented that the pork filling looks very genuine. No cheap and nasty mince here! The pastry was light, buttery and flaky. The filling was tasty and the chutney was moreish (I do enjoy my chutney!). Very good. Well recommended. I’d like to try their other pies in future.


Onto the brioche. Another pleasant surprise when I cut into this loaf. A really soft and fluffy crumb. How do French Oven do it? Again, not like other brioches I’ve eaten from the supermarket which are more dense and buttery tasting. But that’s not a bad thing. This was a cross between a light white sandwich loaf and a brioche. Very enjoyable to eat.


I like my brioche with Nutella. How do you eat yours?


And ending on what we started with. The beetroot sourdough was amazing like the first time. The previous underbaked loaf was clearly a blip and has been more than compensated for.


I recommended French Oven’s breads to go with a cheeseboard for my friend Debs’ wedding last week. The selection of breads (unpictured) along with the cheese went down really well! I got to try the black pudding sourdough, which was tasty and not overpowering like I thought might be.


I didn’t use to buy handmade breads as am happy to make my own. But with French Oven, I’m happy to change this, as their breads are incredible!

I highly recommend French Oven’s breads and bakes. And I respect the way they handle any mistakes they make. It is clear that this is a bakery who cares about their product, standards and customers. Thanks French Oven, you have retained a huge fan and I’m now a loyal supporter.
Labels: artisan bakery Grainger Market newcastle review The French Oven