Anniversary meal at House of Tides


Kenny Atkinson House of Tides is located on Newcastle Quayside and has been open for over a year now. We have been meaning to go since it opened. It is pretty pricey, so we saved the treat for our 3 year anniversary in July. We opted for lunch rather than dinner, as it was a little cheaper but still had plenty on offer.

Our anniversary fell on a Tuesday, which is when we went, so it was quiet and we had no trouble getting a reservation. I imagine it gets busy at the end of the week. In fact we were the only diners, apart from another couple who finished their meal when we started ours. So almost a private dining space just for the two of us! 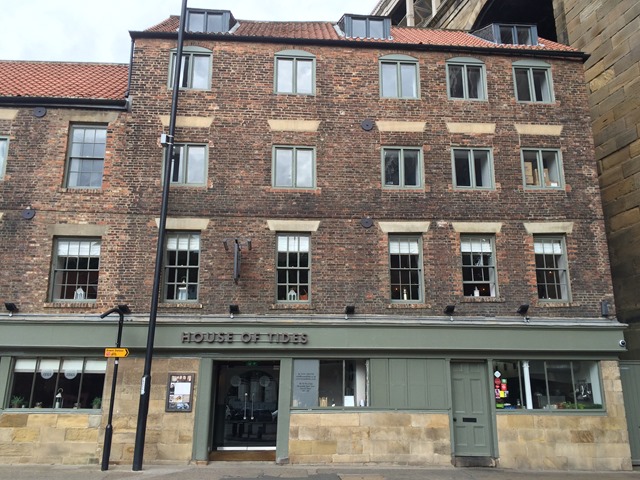 The surroundings are pleasant, both homely and modern. It is to be noted that shortly after we visited here, House of Tides undergone a renovation. I’m sure it will look just as nice, if not better! 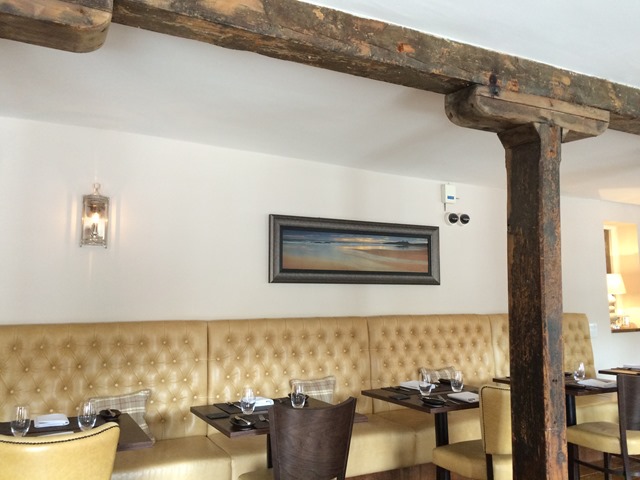 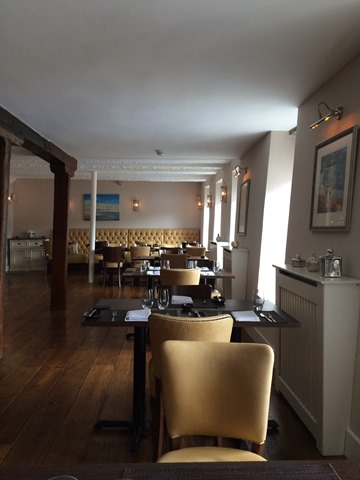 A greetings card waited for us at our table. It wished us a Happy Anniversay from Kenny Atkinson and his staff team. 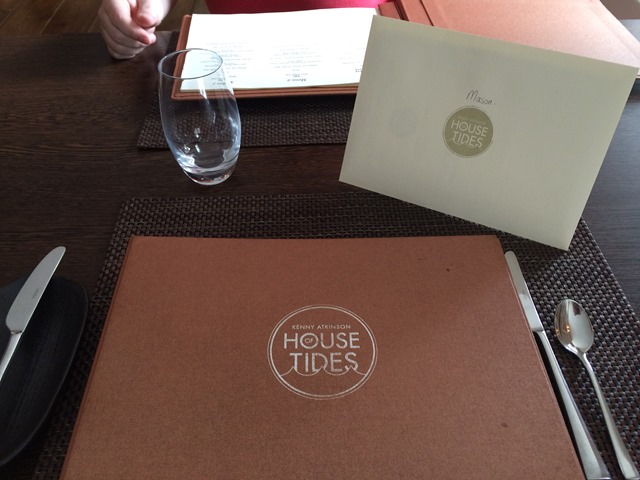 There were 3 menus to choose from at lunchtime. You could have 2 or 3 courses and choose what these are on Menu 1.

Leigh went for Menu 2, which comprises of 6 courses with snacks. There is an option of paying extra for a wine flight, which Leigh chose to do. This included 5 wines paired with 5 of the courses. 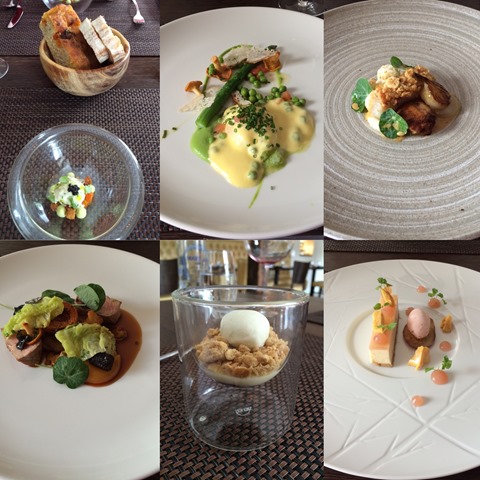 I went for Menu 3 where you get 7 courses.

They had taken the Sea bass & mussels curry course of the menu as were not happy with the quality of the produce. They replaced it with a cured salmon course. This was a shame as I love both sea bass and mussels. However, I’m glad as it shows a level of care and pride with their food. They didn’t want to serve sub-standard food. I was happy to try the salmon as enjoy that too.

Unfortunately, I didn’t take a photo of the fourth course of Scallop, pork brawn, apple, celeriac & smoked eel. I have no idea why this happened. I must have got too caught up in the moment of eating! I have to say that it looked simple and unassuming but like many of the dishes, the flavours worked well together and tasted gorgeous!

Below is a snapshot of my tasting menu. 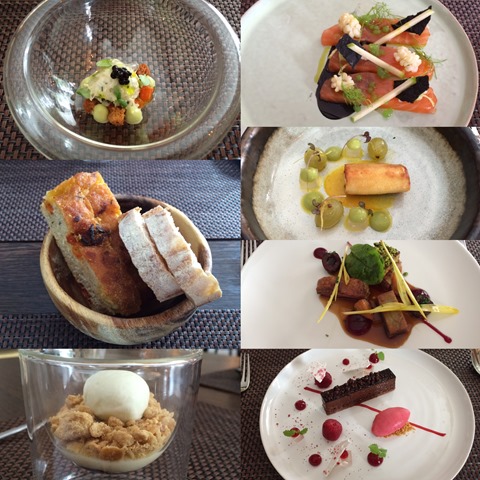 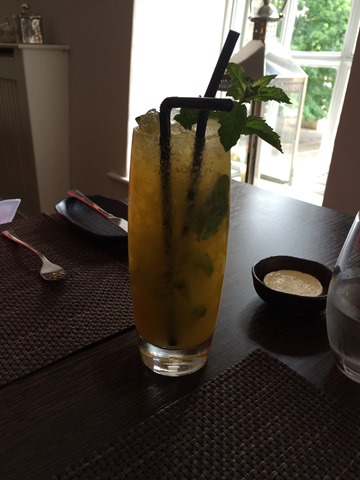 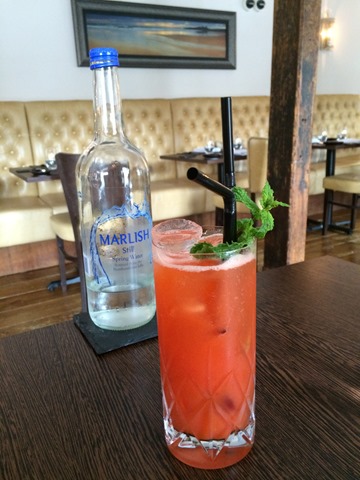 For both our Menus, we started with Snacks. We chose not to have the raw Oysters and were substituted with Cheese and onion canapés. The olives were the biggest we’ve eaten. They were huge, and even though we normally prefer black olives, were tasty. The canapés were simple but light and yummy. A good sign of things to come. 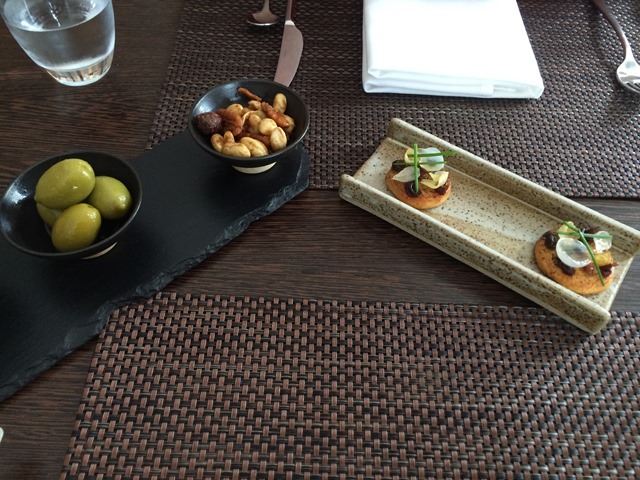 We both had the same first course of Whitby crab, avocado & basil. 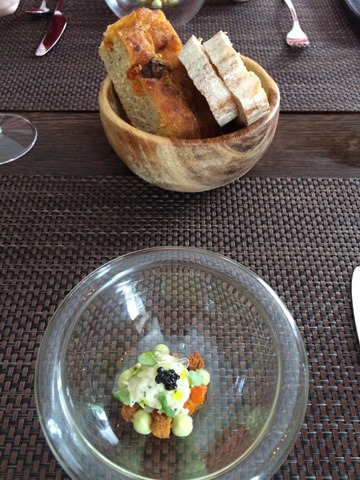 This was quite brave for Leigh as he doesn’t normally eat seafood. But he was pleased he tried it, as it was a wonderful starter. The crab wasn’t too fishy, which Leigh was weary about. The caviar was a little bit fishy but on the whole, he enjoyed the dish. I had no complaint either. Every morsel was very enjoyable to eat. The bread, what I like to call ‘real bread’ was also tasty. 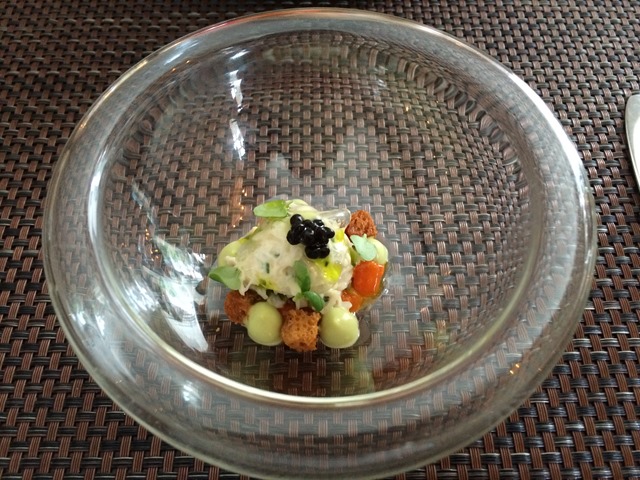 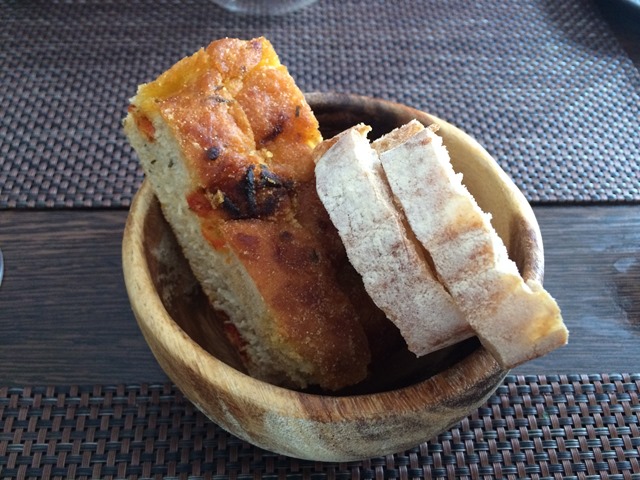 My second course was Mackerel, gooseberries, lemon & mustard. I was told this was the Signature dish. I did like it but it wasn’t my favourite course. The flavours were a little too sharp for me. The dish was light, fresh and zingy. If you like mustardy flavours, you would probably love this. 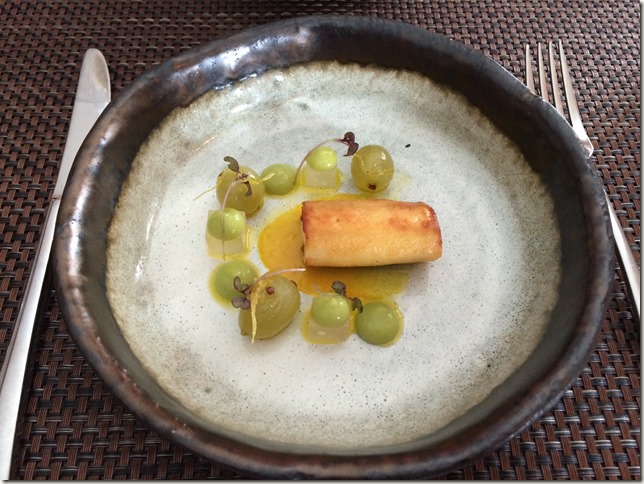 Leigh’s second wine was Bhilar which went with his second course. 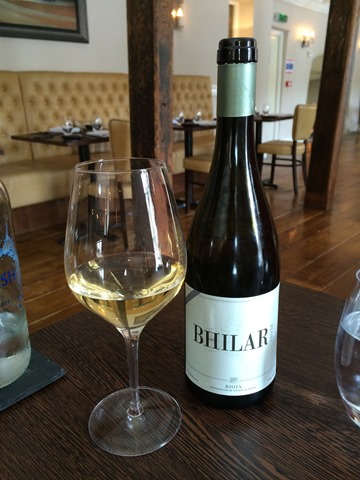 Leigh’s wasn’t keen on the smoked salmon course on the Menu and was allowed to swap it for a vegetarian course. Leigh’s second course was asparagus, pheasant egg, peas & hollandaise.

I was pleased we got to do this, as I was getting the salmon course and meant I could try more things off the menu.

If you’re worried about missing the meat on a vegetarian dish, you don’t need too. This was delicious and very satisfying despite not having any meat. We were both very pleasantly surprised. 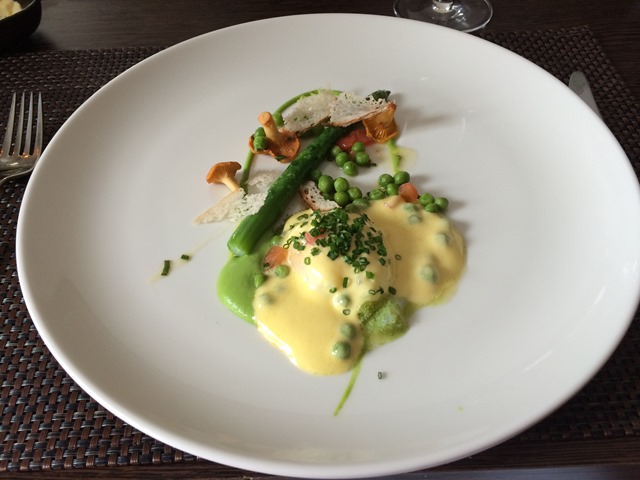 My third course was the Cured Wester Ross salmon, fennel, squid & oyster. This dish was decent and the salmon was of good quality but again wasn’t a favourite or stand-out dish. I am curious about the sea bass & mussels curry that this dish had substituted. I guess I accept that I will never know. 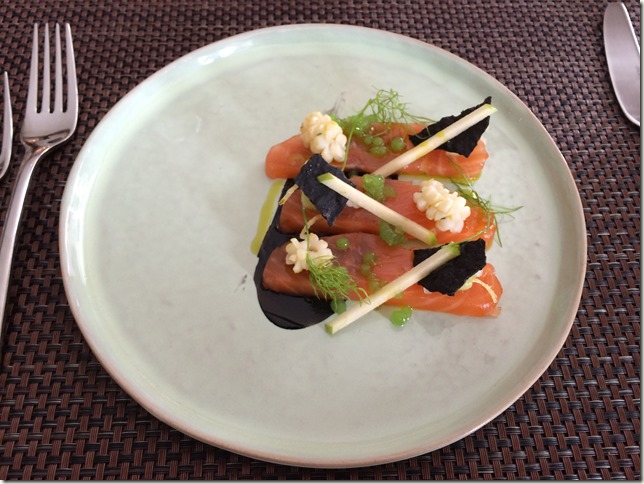 Leigh got a Morgan wine to go with his third course. 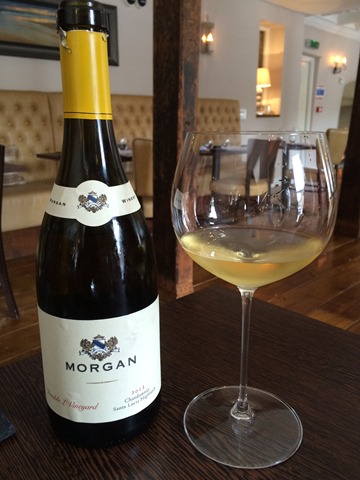 Fish and chicken to me isn’t the most obvious pairing. But when House of Tides do it, it tastes bloody amazing! Me and Leigh both adored the flavours of this dish. The two star ingredients along with co-stars just rocked it. I wanted more (I could eat a big plate full!) and was a bit gutted that this was Leigh’s dish and not mine. 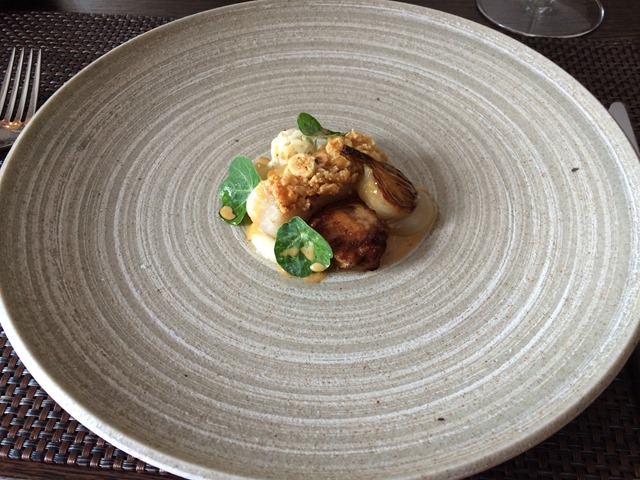 Leigh got a Masut wine to match his fourth course. 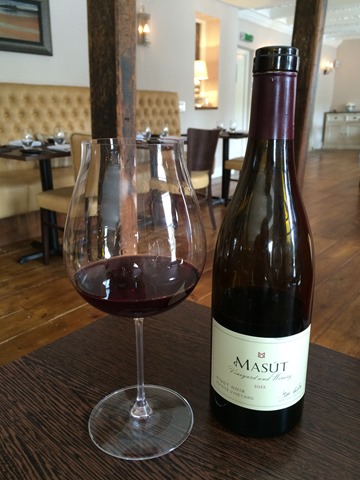 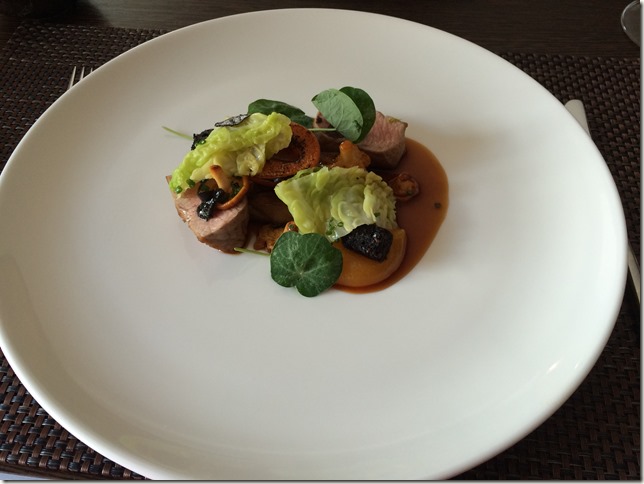 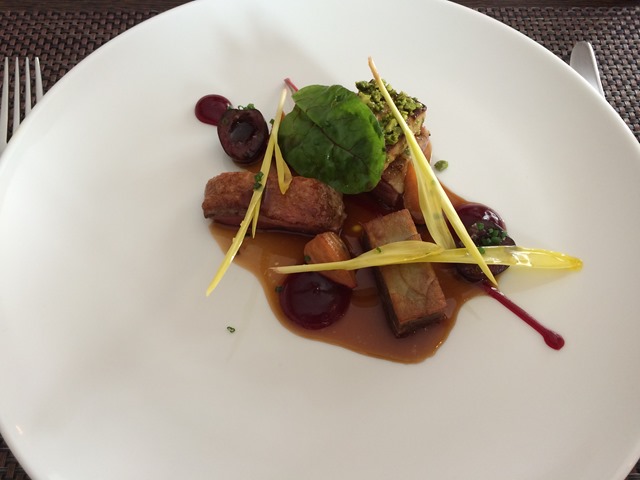 Leigh’s fifth and my sixth course was the start of dessert. Blackberry, apple & almond.

It reminded me of a posh breakfast, like a fruity granola with yogurt. It felt odd eating it after 5 savoury courses. I was starting to feel full at this point, so probably didn’t enjoy this course as much as I could have (on a empty stomach!). I knew I had another dessert to go, which was also making me feel a bit uncomfortable.

In future, I’d go for either Menu 1 or 2 where there are less courses. Just being greedy me as usual today. Eyes bigger than belly. Anyways, Leigh really enjoyed the flavours of this dessert. 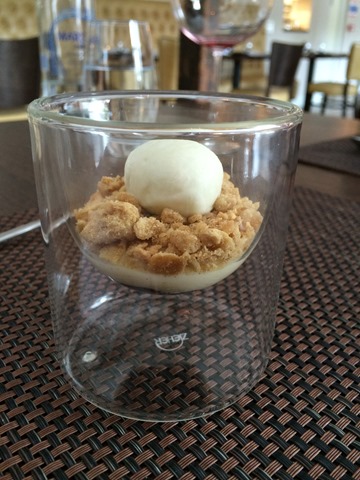 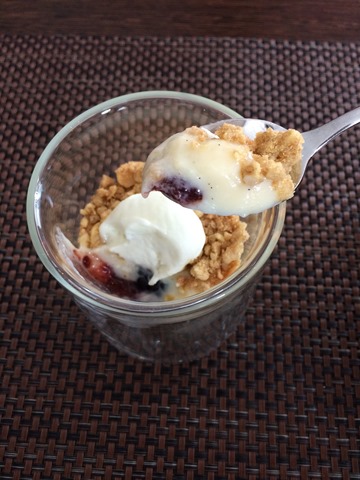 Leigh’s fifth and final wine from the Wine flight. He got a Domaine Cauhape French dessert wine. 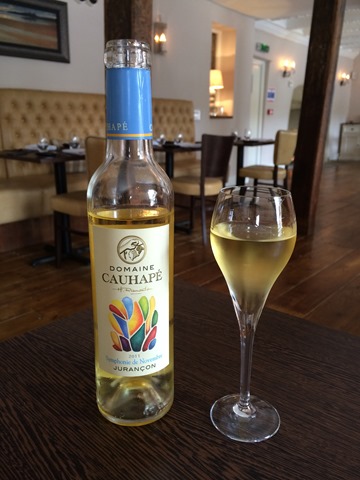 Leigh’s final course was Cheesecake, elderflower, peach & honeycomb. This was not only beautiful but light, balanced and a delight to eat. 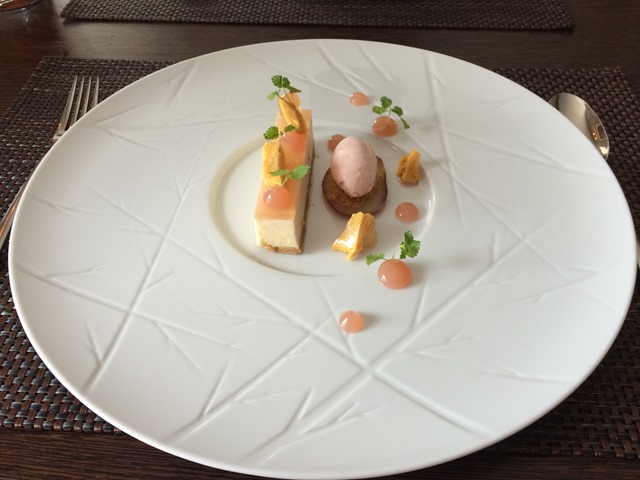 My seventh and final course was Dark chocolate, rosewater & raspberry.

Chocolate lovers will go crazy for this dessert. It was chocolaty, smooth and rich. Everything you would want from a chocolate dessert. The rosewater element was pleasant and not overpowering. The raspberries were there to cut through the richness but I found them too tart. Overall, I didn't feel this dish was balanced in flavours and as easy to eat as Leigh’s Cheesecake. 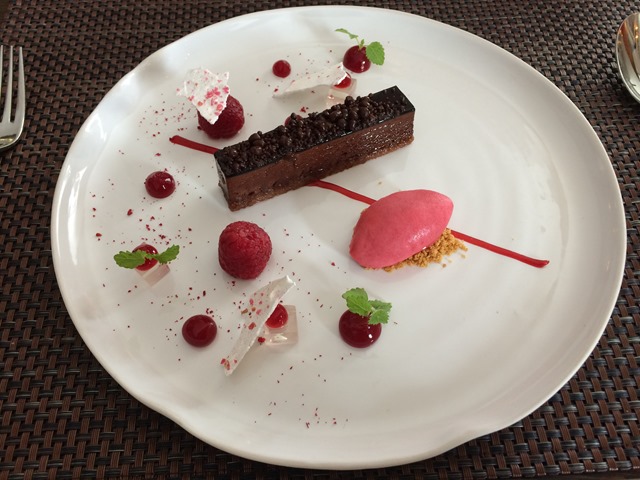 The staff alongside the food have been great. They were both knowledgeable and accommodating. Leigh recommends the Wine flight. It seems pricey but you pay for the expertise of the Sommelier and the opportunity to try different wines. And Leigh felt they did pair up with the courses well. He got to try wines that he normally wouldn’t try, learn more about wine & food matching, and enhanced his overall eating experience.

When we compare similar food experiences we've had to this one, House of Tides comes up top. I’ve had a tasting menu at a fine dining restaurant and we’ve eaten at a Michelin star restaurant but think the food is better here! Kenny Atkinson is heading in the right direction and we’re now firm fans!

We really did treat ourselves at House of Tides and it was a wonderful way to celebrate our 3 year anniversary. House of Tides is a gem and we highly recommend a visit here. We will definitely be returning in hopefully the not so distant future. It is expensive but is worth it and it’s nice to treat yourself every once in while!