For Christmas last year, I wanted to try making a traditional Figgy pudding for the first time. When it came to it, I decided against making one. It would have been too much work (alongside making Christmas dinner) and I didn’t have all the ingredients I needed. I had already bought dried figs and still wanted to use them in a dessert somehow.

I came across this Food Network recipe for Warm sticky figgy pudding and it ticked the right boxes for me. It is similar to my Sticky date pudding except has the addition of dried figs and chocolate.

Don’t make the same mistake as me though when following the recipe from website. It says that it makes 4 portions. So, I decided to double the recipe to make 8 portions. I ended up making 16 individual portions plus enough to fill a large pie dish! I had to freeze most of the puddings and found it did freeze well. I wont be making the same mistake again. This recipe will make you plenty of individual portions without having to double it. 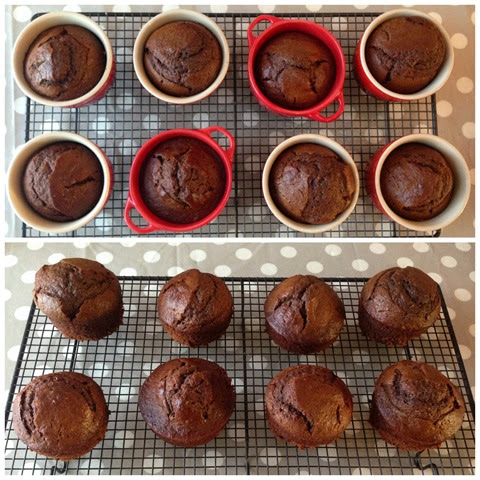 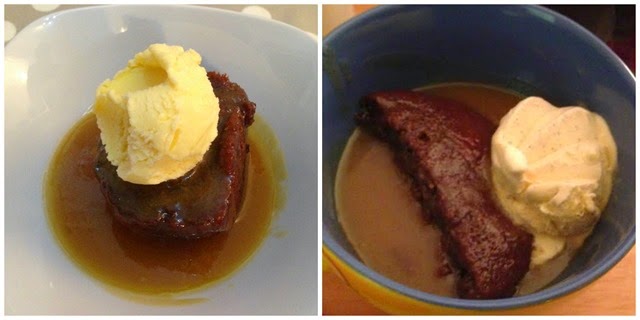 It was a bit of a risk trying a new recipe for Christmas dinner but it was a risk that paid off! This pudding came out as a cross between sticky toffee pudding and chocolate cake! It  is yummy! It goes well with the accompanying toffee sauce and ice cream. It’s also nice served with custard or pouring cream. My cousin had it on Christmas eve and said that it was one of the best desserts she has ever had. High praise indeed :–) 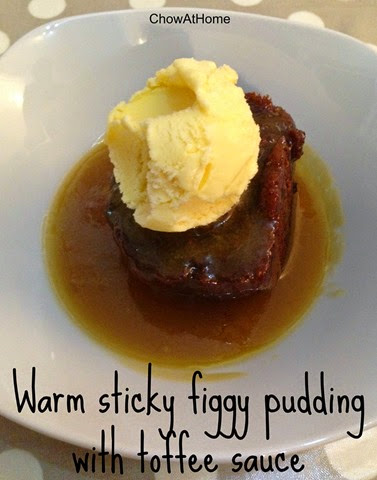 
1) Preheat the oven to 180C/Gas 4.
Grease ramekins.
2) Add the dates, dried figs and water to a medium saucepan.
Bring to boil over medium heat.
Remove the pan from the heat and stir in the baking soda.
Let cool for about 5 minutes, then add to a blender and puree.
3) Using a hand mixer, cream the butter and sugar in a large bowl.
Add the eggs and beat well.
Fold in the flour, the pureed date mixture and the chocolate.
4) Put the mixture into individual ramekins or a large pie dish, filling halfway or slightly under.
Put in the oven and bake for 20 - 25 minutes.
5) Prepare the sauce by stirring the sugar and cream in a medium saucepan over low heat.
Simmer until the sugar dissolves.
Raise the heat and bring to a boil, then reduce the heat and simmer for 5 minutes.
Add the butter and stir until incorporated.
6) Remove the ramekins/pie dish from the oven and let stand for 10 minutes.
Remove from the ramekins/pie dish.
Serve warm with the toffee sauce and vanilla ice cream (if desired).
Labels: baking Christmas recipe sticky date pudding sticky toffee pudding toffee sauce warm sticky figgy pudding