As much as I enjoyed making sugar models for my previous two birthday cakes (1 & 2), I wanted to take a break from modelling (it does get pretty intense consuming your life!). And try my hand at something else in the cake decorating world.

I’ve not worked with buttercream decorations much before. With my friend Nichola’s 30th birthday coming up, I fancied having a go at decorating a cake with buttercream roses. I’ve seen these a lot online but didn’t know how to make them. With a bit of research, I discovered that it wasn’t so much a technique but more of an essential piece of equipment! This being a Wilton 1M or Wilton 2D piping tip. So I ordered both and looked forward to making my own buttercream rosettes!

As well as purchasing the Wilton piping tips, I got myself a cake decorating turntable. I’ve always wanted to get one and it is the best help!

I started off making my Triple layer chocolate cake with caramel icing. I then gave my cake a ‘crumb coat’ with Vanilla buttercream. This was the first time I’ve covered a  cake as I normally leave them ‘naked’. Not perfectly smooth but I was happy with my first try.

The crumb coat is essential for ensuring that there are no cake crumbs showing when you pipe your buttercream decorations on. It also gives a good surface for the buttercream to stick too. And as I found out, it means you can easily scrape off any buttercream decoration that you’re unhappy with, without taking off any of the cake.

I chilled this for half an hour to help it set. Next time, I’ll go over the crumb coat again after chilling with a hot pallete knife to get it smoother. 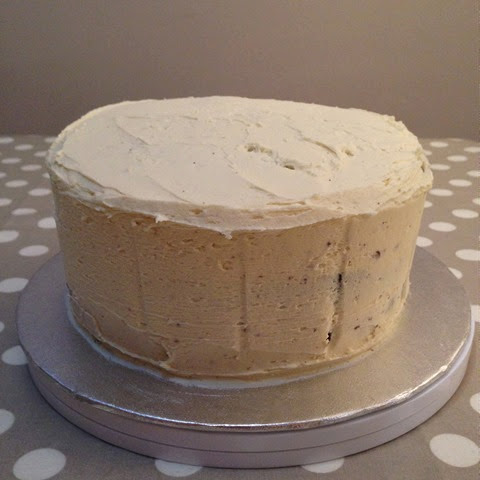 I ended up with 6 cupcakes from leftover cake batter. I used these to practice piping buttercream roses.
I planned to have a red swirl effect rose on my cake. I wanted the roses to go with the ‘30’ candles, which were a white colour with red outline. But due to mis-planning of the amount of buttercream needed to cover a three-tiered cake in roses (you need a lot!) - combined with removing roses and starting again several times (I'm a perfectionist!) – I ended up with a peachy pink due to the red food colouring mixing completely with the buttercream. Which ended up being a very pleasant colour!

Anyways, you achieve a coloured swirl by painting lines of food colouring down your piping bag. Add buttercream and pipe as normal. 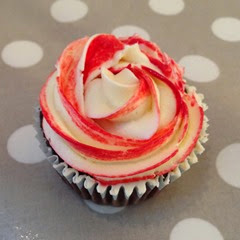 It took a bit of practice but once you’ve got the knack - it’s fairly quick and a breeze to pipe buttercream rosettes! 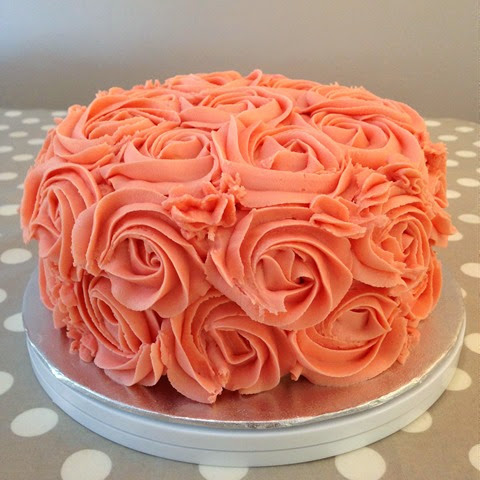 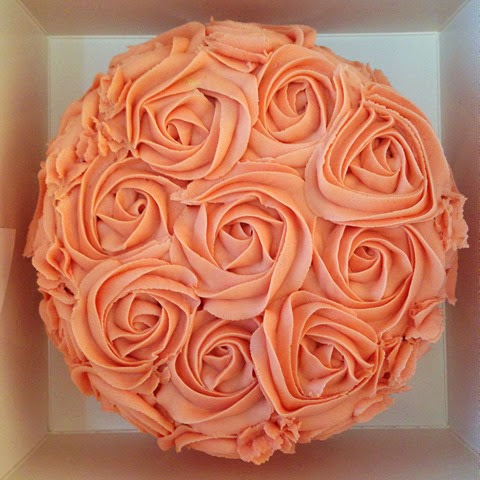 I was pleased with the finished product as it makes for a ‘Wow’ celebration cake without too much work. Nichola and friends were impressed with the cake :-) 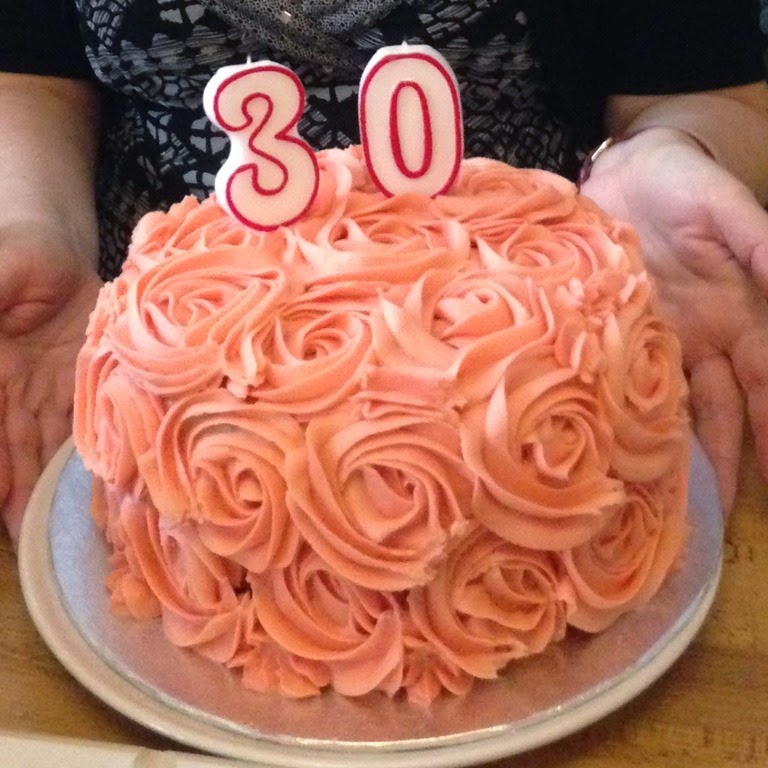 I don’t normally pair vanilla buttercream with chocolate cake but found it worked well here. I would use this combo again. 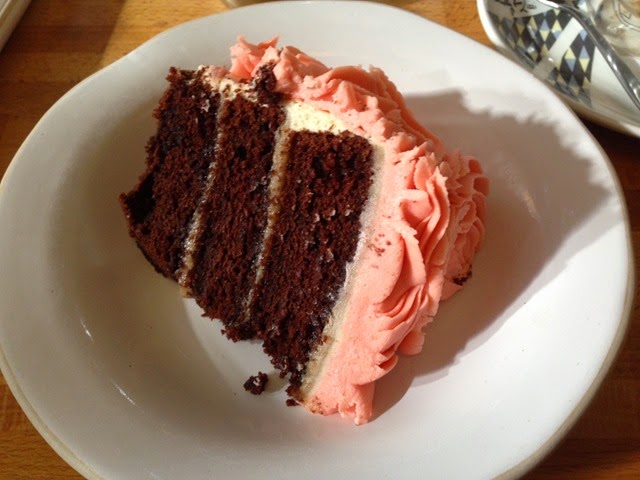 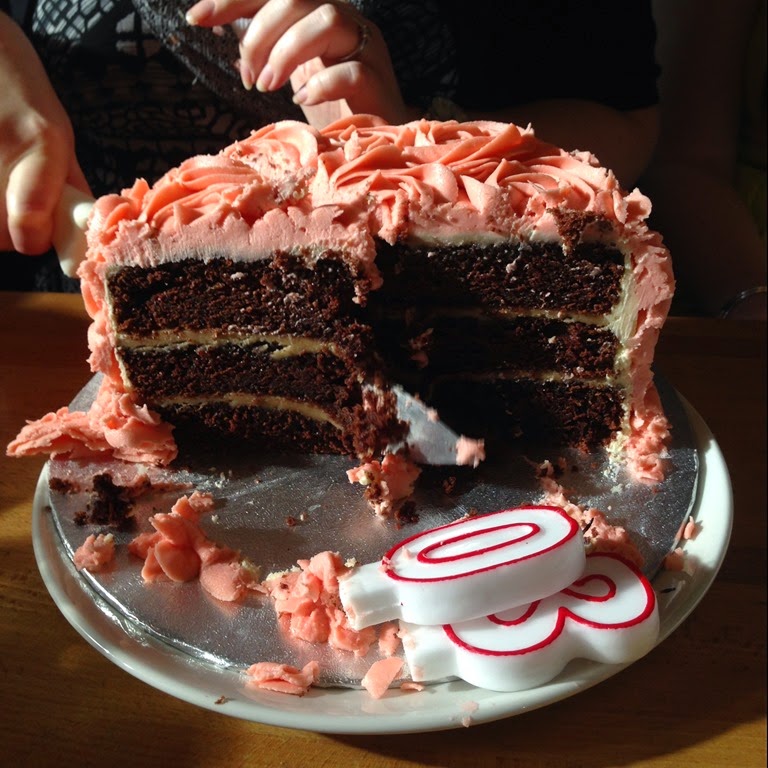 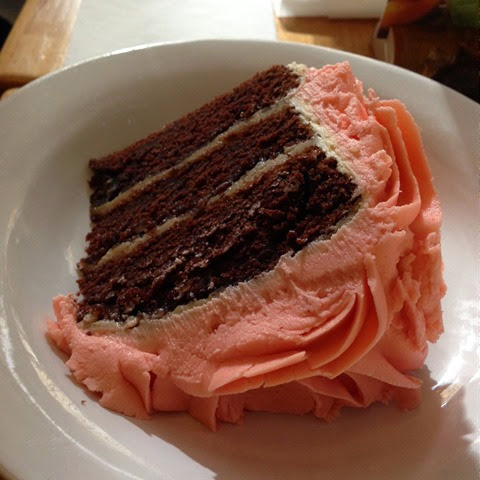 My mother-in-law Sandra has been making and decorating cakes for a long time. You can check out her creations on her FB page here. Anyways, she asked me to show her how to pipe buttercream roses, as she’d never done it before. So, I took round my piping tips and we had a go using cream cheese icing and purple food colouring. The icing was a bit wetter and looser than buttercream so didn’t pipe or set as well. But we managed to get some roses out of it. It was great getting to teach her something new! 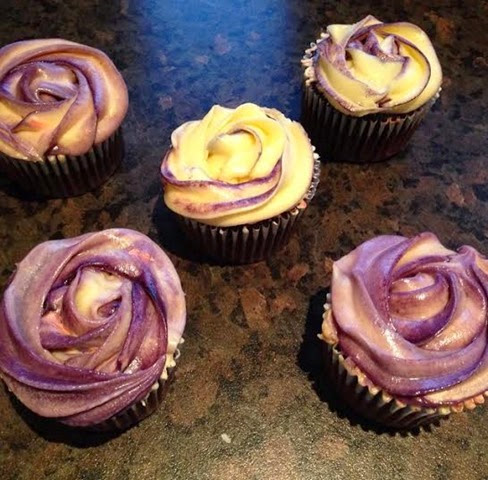 Since making this cake, I’ve been looking at other ways of decorating with buttercream. There are a few new techniques that I want to try and I’ve already ordered the Wilton piping tips needed. So, watch this space for hopefully more prettily decorated cakes with buttercream.
Labels: birthday cake buttercream rosettes caramel icing chocolate cake gel food colouring wilton piping tip