Shortly after making my cousin Carine’s surprise birthday cake, I was honoured and excited to be asked to make the figures for my father-in-law’s birthday cake. My mother-in-law Sandra requested a duck hunting theme and gave me some ideas to work with.

Sandra made the vanilla sponge cake, covered it with chocolate flavoured roll icing and made the bushes. I spent about a week and a half making the different components for the figures. I made Ron (in his Barbour jacket he goes hunting in) with his double barrelled shotgun, his black Labrador Jet and three wild ducks (two ‘in the bag’ and one ‘that got away’).

I am really pleased and chuffed with my second go at modelling. I found I made a lot of improvement since my first attempt on Carine’s cake. I can only keep practicing and getting better! Sandra was over the moon with the finished cake. Ron with the rest of the family were also impressed and delighted! :-D 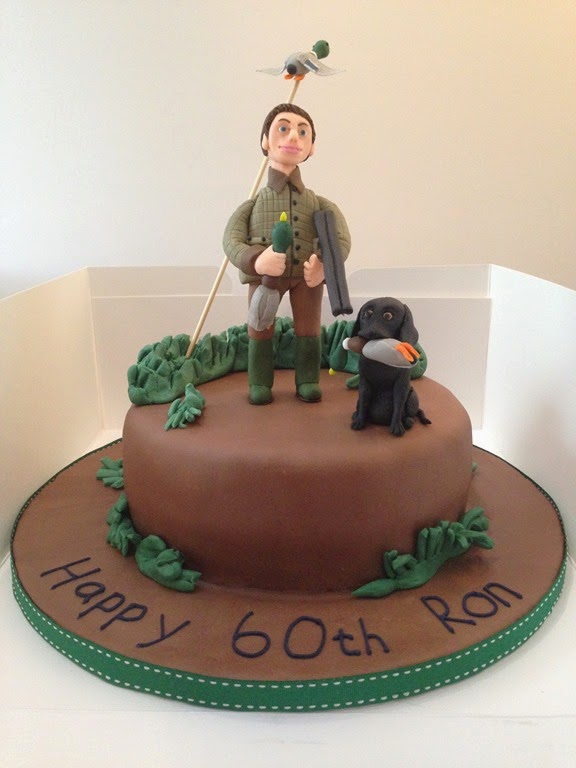 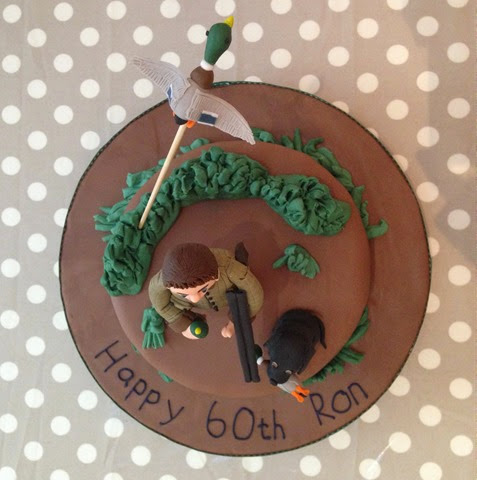 Read on if you're interested in the process of making this cake figures/toppers... 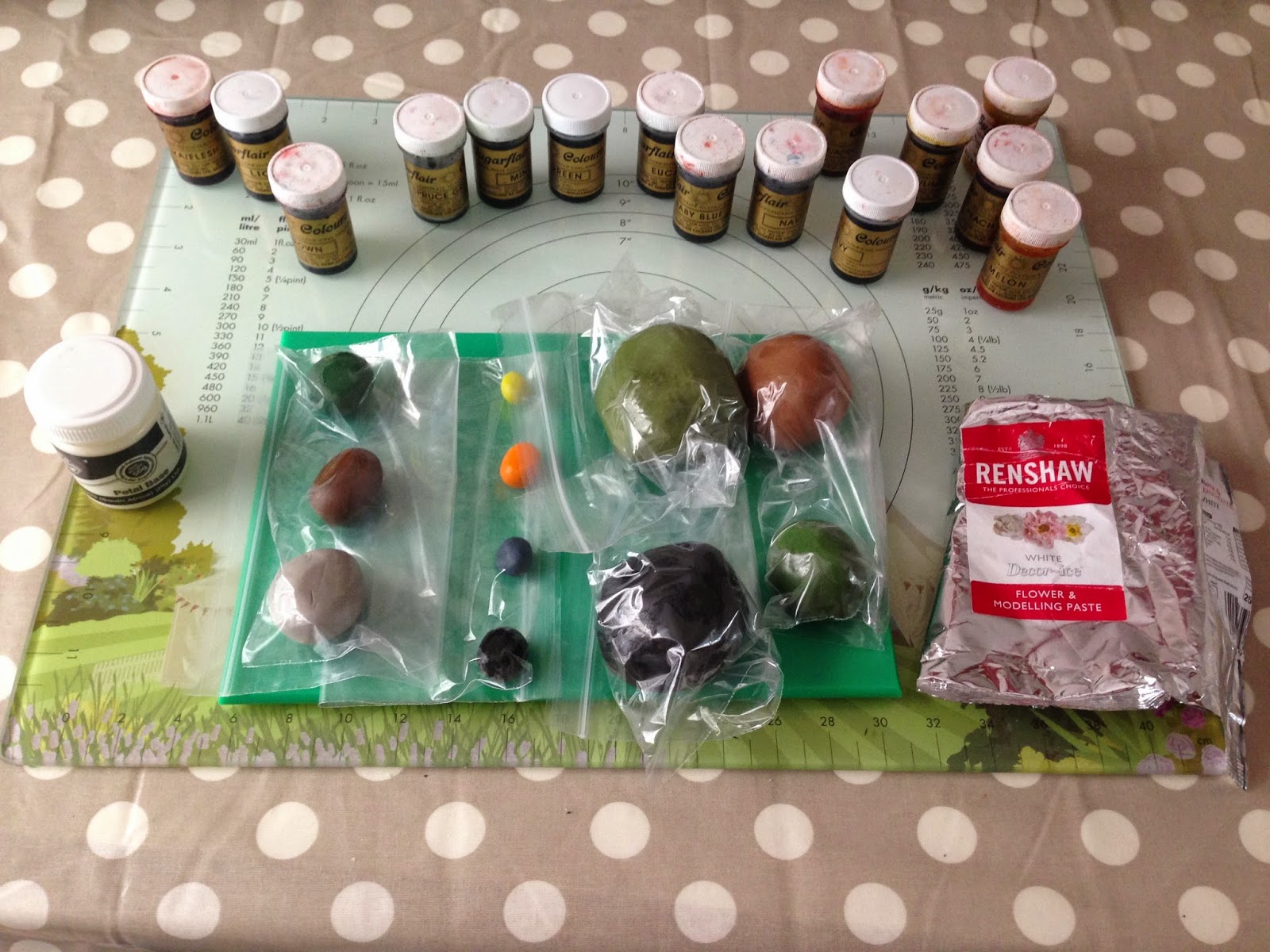 Like with my first cake decorating attempt, I searched online a lot for tutorials and images of similar cakes/figures that I wanted to create.

I started off by making the ducks first. I thought in terms of scale, it would make sense to make the smallest things first then I would know how big the next things would be. So, ducks first, dog second, and man last.

I found a lot of duck hunting themed cakes but the ducks were mainly sitting on a pond.  Sandra had wanting flying ducks originally so I tried to create my own from pictures of real flying ducks. I tend to do best when I copy of something but in this instance had to make it up myself!

I came across some fondant dogs holding ducks in their mouths and liked that idea. I then decided to have Ron holding a dead duck too. I liked the look of mallard drakes for their multi-colouring. Even though it would have been simpler to make the duller coloured females!

The first duck I made (furthest right below pic) was a tad big, so I scaled down and made a few others until I was happy with the size. It made for good practice. 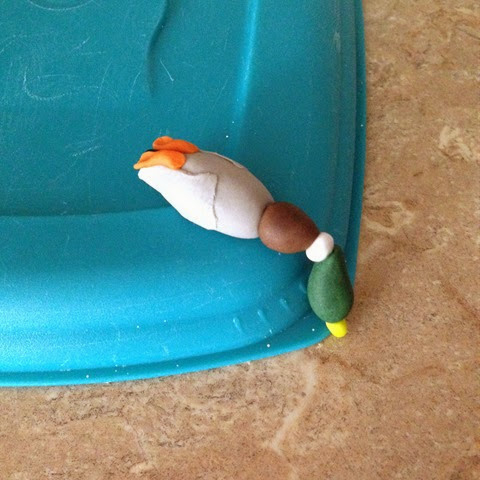 Next, I tackled the challenge of making a dog. I looked up tutorials and pictures of fondant dogs online but a lot of what I came across looked very cartoonish. I wanted something with a bit more detail and realism. I eventually came across this Renshaw how to make a fondant dog tutorial and loved the look of their work.

The first dog I made was far too large (I see a theme starting to run here!). Ron would have ended up being monstrously big. So I made another one which was smaller. The second dog was more refined than the other – less chunky and cumbersome looking – more realistic. And for some reason, perhaps the placing of the head or the head was too heavy – the first dog’s head ended up drying looking down. So, it was worth trying again!

I have to say, that making the dog was my favourite bit of this whole process. I’m really happy with how it turned out.  Renshaw’s tutorial is excellent. Very easy to follow with a good result. People loved this figure in particular – it reminded them of when Jet was younger and brought back happy memories :-) 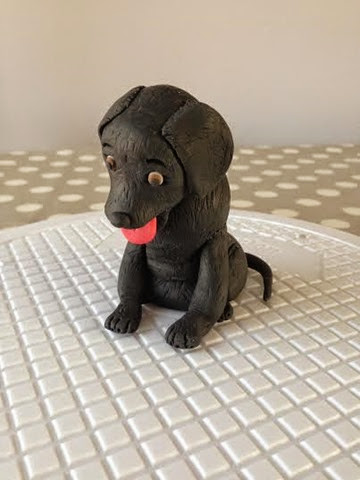 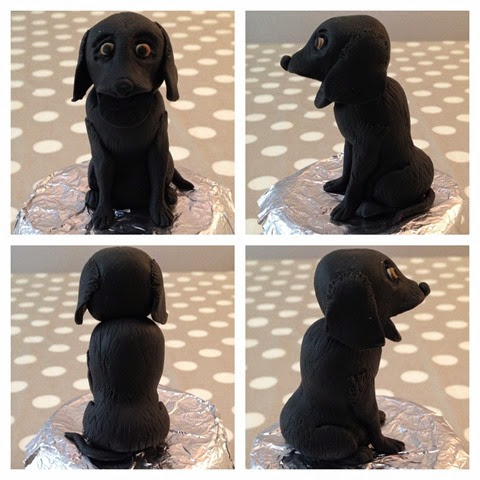 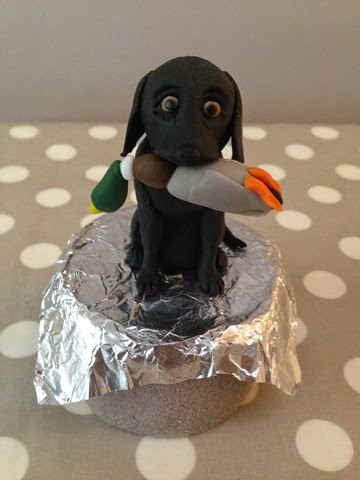 And finally, onto making Ron. I mainly used these tutorials part 1 and part 2 to make a standing person topper for Carine’s cake, as well as this one. I also used this figure modelling tutorial for the human figure template, as well as ears and hair for this cake.

For both cakes, I had trouble in getting the human figure to stand securely in the cake. Both ended up falling over!

For Carine’s standing topper, this was due to not having all the right equipment. I didn’t have a suitable base (e.g. styrofoam block) for it to stand in from the beginning of making it. I thought I’d combatted this when I got a floristry block to make this standing topper. I didn’t like how it left a gritty dust everywhere and was difficult to push things and pull things out of it. I was also given dowels from Sandra to thread through the legs to give them extra strength and structure. Unfortunately, I found the dowels didn’t work as the legs fell apart and were squashed to mush when i tried to thread them through. I decided to use candy pop sticks instead as they are thinner (and also used in the above tutorials). These threaded through the legs fine but ended up not being sturdy enough to keep the topper standing.

I also had difficulty with getting the arm to stay stuck to the body that was holding the duck. I ended up having to swap the hands around and stick the arms to the body rather than have a gap and they hold on their own. There was too much weight for the topper to handle. I didn’t want too but had to resort to using super glue to hold bits together, as the edible glue wasn’t strong enough.

I think I need to make standing toppers smaller/shorter, as I’ve been making them too tall and therefore too heavy to be supported sufficiently on the cake. I know this now and will try for next time! 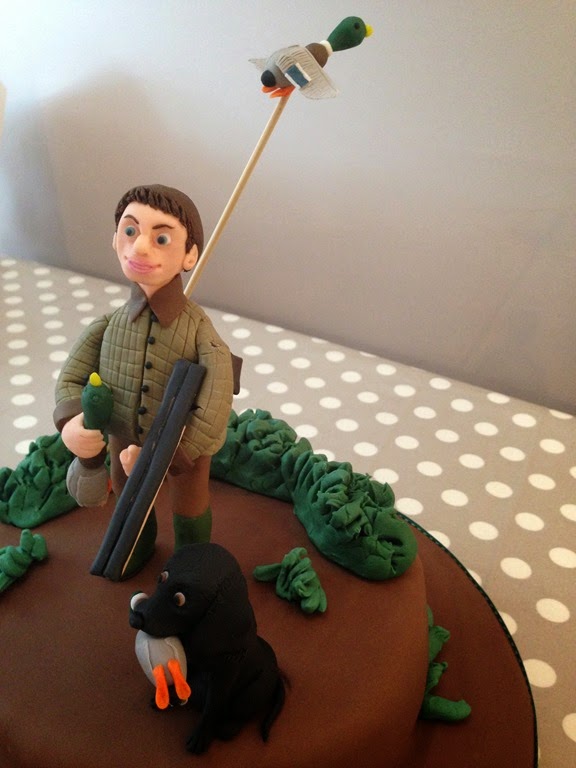 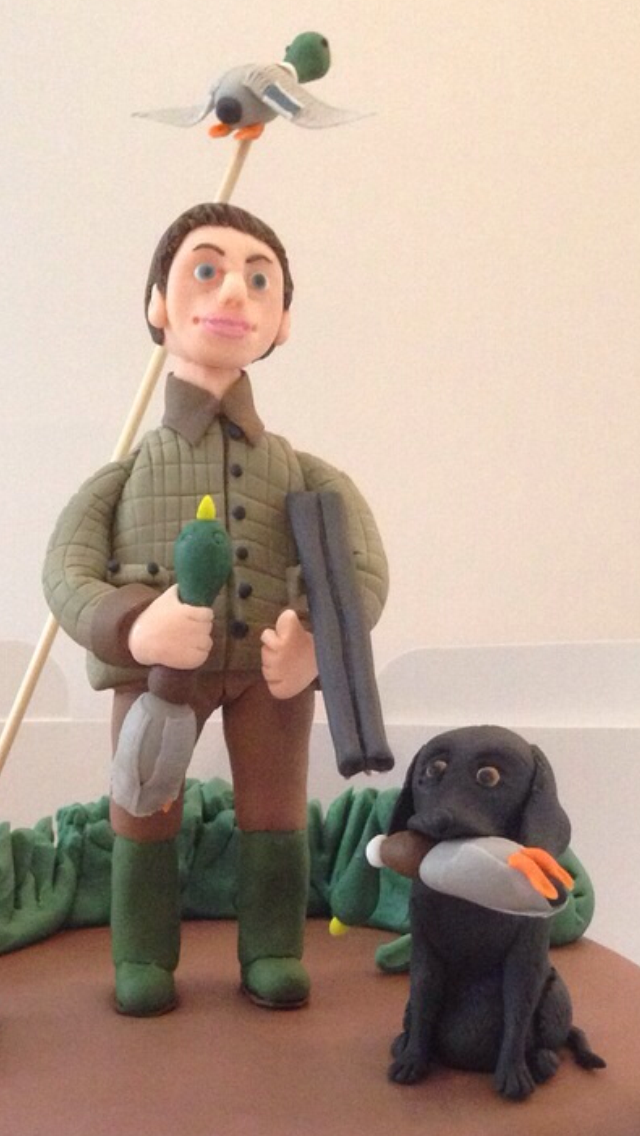 All in all, I spent a lot of time and love in making these cake figures/toppers. And it was worth it. Don’t know when my next cake decorating challenge will be but I look forward to improving and creating some more! :-)
Labels: birthday cake cake decorating duck hunting cake