Here are my eats from Saturday (also International Women’s Day).

I’ve been riding the pancake train, not only on Pancake Tuesday, but also before and after!

I had these Canadian style pancakes on Wednesday (day after Pancake day) topped with Greek yogurt and caramelized apple. I’ve never caramelized apples before and found it really easy to do. I melted some butter in a frying pan and added a mixture of soft light brown sugar and caster sugar. I then added sliced apple to the pan and stirred in the sugar butter mixture for about 5 minutes. The result was amazing. So delicious. I will be making this again! I will try also with bananas. Will be so good. Yum!


I popped to the Fenwicks Warehouse sale with Leigh and my mum. We had a peruse and came away with some things we’ve been after for a while (iron and pillows). I also picked up a Tala loose bottom flan tin, as I don’t have this type of tin already. I ended up using this tin later today.

It was then time to meet my girl friends for lunch. A lovely thing to do, especially with it being International Women’s Day!

We went to Butterfly Cabinet (formerly Belle & Herbs) in Heaton, Newcastle. I’d been here before when it was Belle & Herbs a few times but not since it became Butterfly Cabinet. It was very busy, like I remember it being all the time. There was quite a few of us, so after waiting for a while, we sat down at two different tables. After a little bit more waiting, we managed to move to a larger table that fit the whole group.
The menu didn’t look as if it had changed much. I got an elderflower iced tea (as it’s quite warm inside!). This was refreshing, if not, a little too much cordial and strong in flavour. I wasn’t feeling really hungry as had a filling breakfast (and I knew I was having a large steak for dinner), so I opted for a lighter option of a veggie sandwich. I got the Club Med (roasted red peppers, courgette  and aubergine with goat’s cheese, sundried tomatoes and tapenade). This had loads of flavour and I didn’t miss the meat. I only managed half the sandwich, so took the other half away with me. It didn't go to waste, as Leigh had it soon as I got home.


It was British Pie Week this week (3-9 March) and I’d made a Chicken & leek pie earlier on in the week. I had puff pastry to use up from the freezer. I got to use my Le Creuset pie bird for the first time with my matching pie dish. One of those little things that make me smile :) This pie was very tasty!


I’d planned to make another pie by the end of the week but didn’t get round to it. So, it was nice to end British Pie Week with my mother-in-law’s Corned beef pie.

I didn’t feel hungry for a while after lunch with the girls. When I started to feel hungry again, I had a slice with tomato sauce (of course!).


Shortly afterwards, I was hungry and ready for my dinner!

Fortunately, dinner prep was minimal and took little time in cooking. Leigh quickly fried the sirloin steaks off (medium); the rice was a microwave packet; the steamed asparagus were leftover from a previous dinner; and the curry sauce was leftover from last night’s Indian takeaway.


There wasn’t loads of curry sauce left over but the little we had made such a huge difference to the rice. It really lifted it. So much flavour! Dinner was really enjoyable. I was hungry and it took no time! 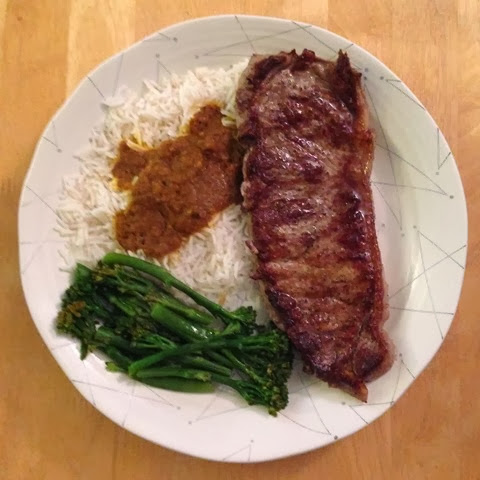 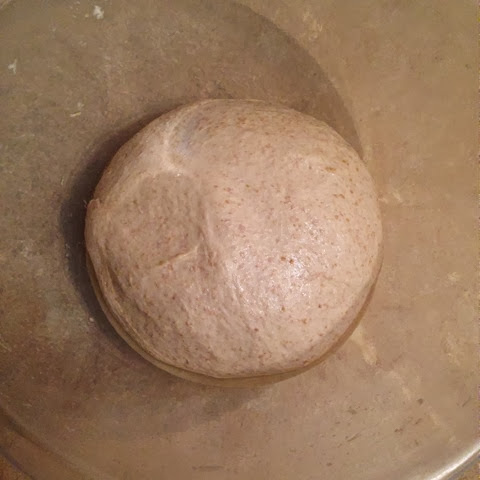 I got Leigh to score the loaves for me, as I’m useless at this! The slashes help the bread to bloom when baking. 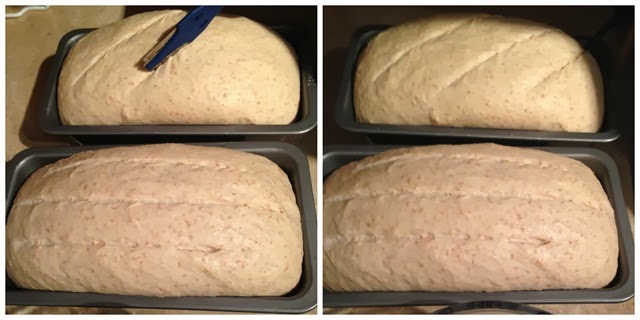 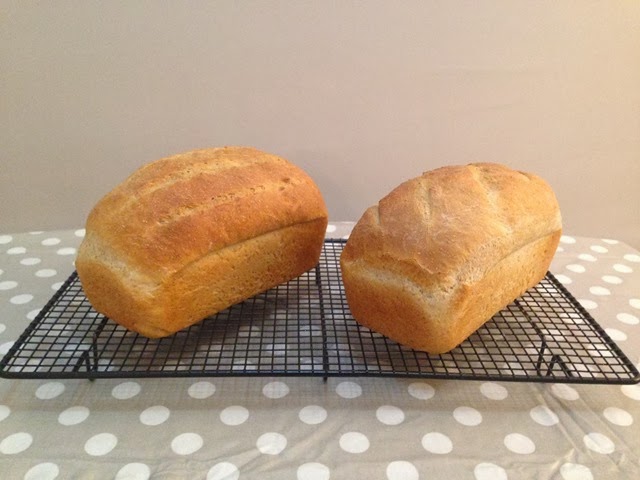 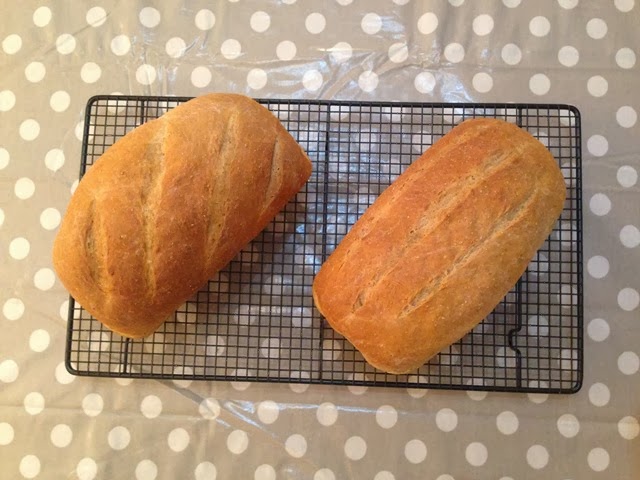 Even though, I've made bread to this basic bread recipe many times, I still get that little ‘butterflies in stomach’ feeling when it first gets sliced. I always have a little worry in the back of my head, as to whether it’s cooked properly, is soft, has a good crumb structure etc. I then feel really relieved and chuffed when it turns out to be all those things (and more)! Leigh said this one was particularly delicious this time! :-) I kept one loaf for us to have and gave the other one to my mother-in-law. She loved it! 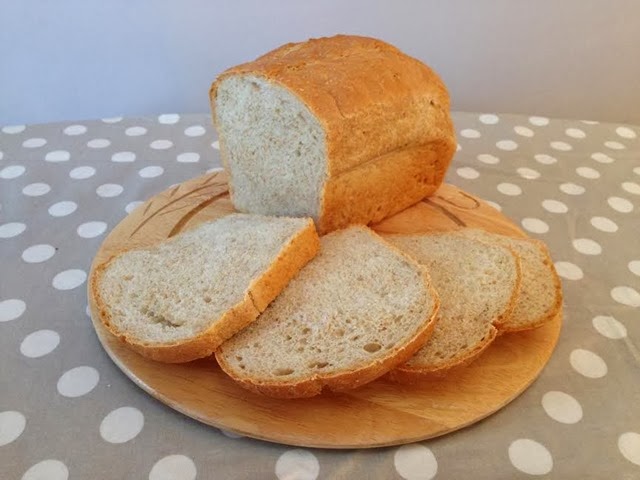 I had condensed milk to use up and fancied something sweet for after dinner. I did think of making my Coconut & lime tea loaf but wanted to try something new. I looked up recipes using condensed milk online and came across this recipe for Neenish tarts. These are an Australian sweet but the origin of its' name is unknown.

I didn’t bother making the chocolate icing and kept all the icing plain. It is a lengthy process in three stages. Firstly, make the pastry shells and cool. Secondly, make the lemon buttercream and fill shells. Lastly, make the icing and top the filling. My pastry wasn’t very successful, as it rose too much and the sides of the giant tart collapsed down. It did taste nice though. I may have to blind bake with baking beans next time to keep the pastry from rising. 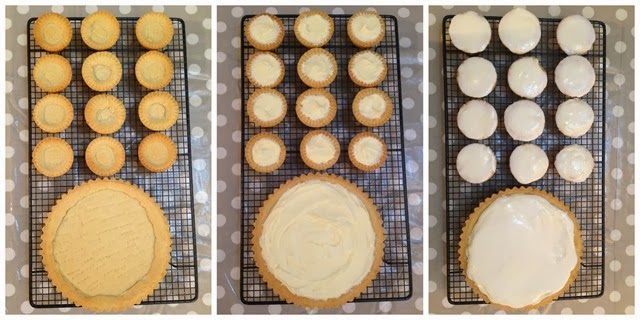 Overall, I found the three components of the tart together to be a little too sweet. The pastry is not only buttery but sweet, the lemon buttercream is also sweet, and the icing is really sweet! A tart is quite nice though to have with a cup of tea or coffee, where you might want a little bit of sweetness to go with a cuppa. 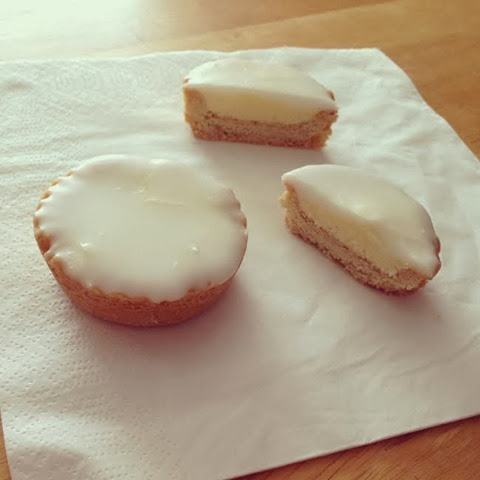 I looked at other Neenish tarts recipes and some include jam in the centre. I think that a layer of raspberry jam would go really well (with this recipe) underneath the lemon buttercream. The tartness would cut nicely through the sweetness of everything else. Another idea would be to top the lemon buttercream with fresh raspberries. I think this would not only look pretty but make a decadent petit four.

So my Saturday night ended with a Neenish tart and a Matcha latte. 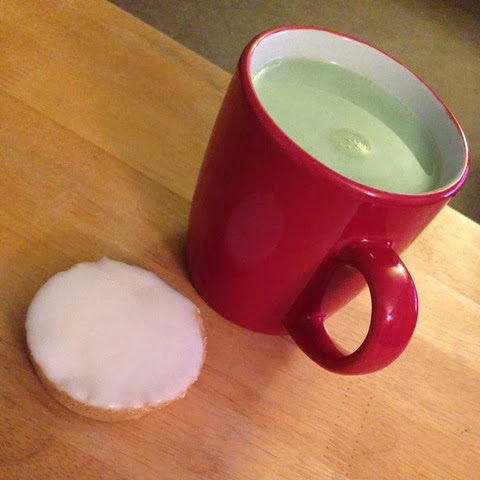 I took my giant Neenish tart into work the following Monday and shared with colleagues before the team meeting. People seemed to like it :) I think I prefer eating it this way - as a slice with a fork rather than a hand-held tart. Makes it feel more like a dessert rather than a snack. 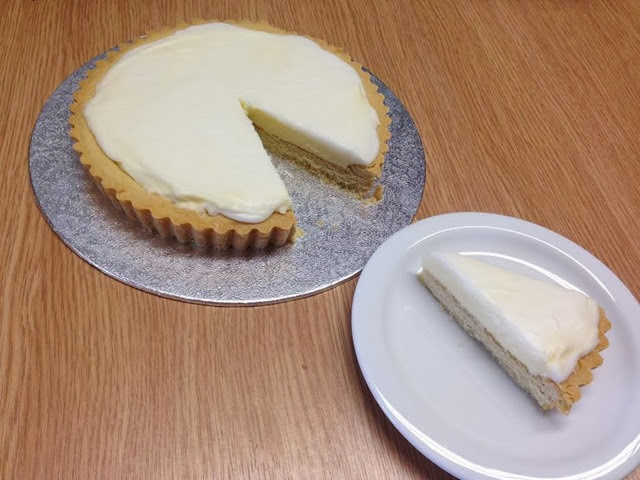 Later on this week, I had some strawberries and tried topping the giant tart with these. This worked well. The fresh fruit really lifted the tart. It gave it another dimension and stopped it from being one dimensional. I still think raspberries would work better, as they’re softer and juicer. If I used strawberries again, I would chop them up into smaller bite-sized pieces to make eating them easier and so you could have a bit of strawberry with each bite of tart. 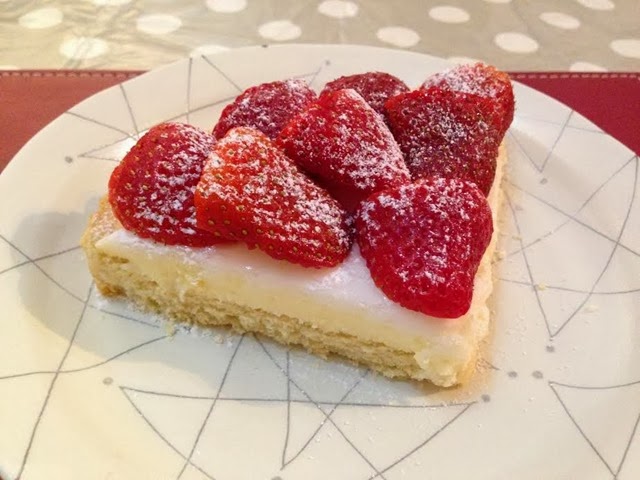 Enjoy the rest of your Wednesday!