Apologies for not posting as often as I had resolved to, back in mid-January (when my blog turned 1 year old). I only managed one post in the whole month of February. This is completely misrepresentative of what I’ve been up to in the kitchen! I need to get myself into the habit of posting regularly. Hopefully, March will be better. In the meantime, you can keep up to date with ‘Chow At Home’ on Facebook, where I post more frequently.

Anyways, I looked back at my posts last year and noticed that I did a lot of baking at the start of the year then baked less as the year went on. The same seems to be happening this year already. I certainly did a lot of cooking and baking this month! So, here is a bumper of a post featuring my cooks and bakes from February. 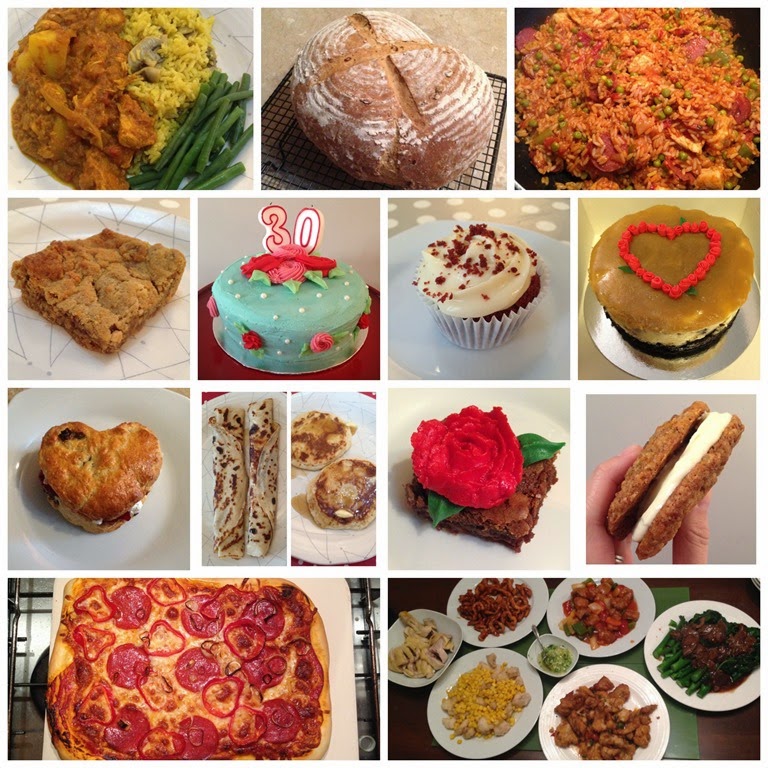 
I worked one-to-one with a young man during February. One of the things he identified that he wanted to develop was independent living skills in cooking. He wanted to be able to cook more than a microwave meal.

We made pizza from scratch a couple of times using this Tesco recipe for the base. I’ve used this recipe before with previous youth groups. It’s simple and always produces a good result. He was pleased with what he’d produced. We shared the pizza with my colleagues at work, who all really enjoyed it! 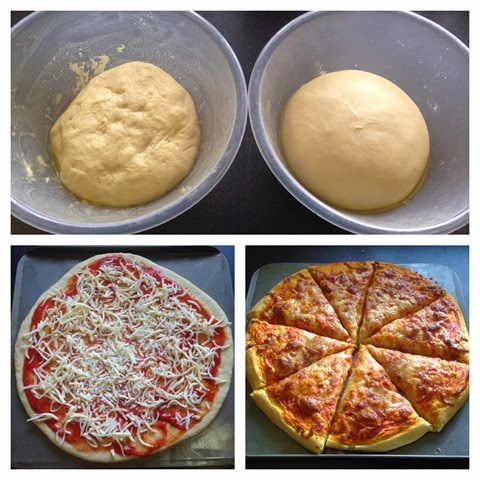 I enjoyed the pizzas I made at work so much, that I wanted to make it at home. Me and Leigh went for toppings other than just tomato and cheese. We went for pepperoni, red onion and red pepper. We’ve been wanting a baking stone for a long time and eventually got one! Which we used straight away for the pizza! 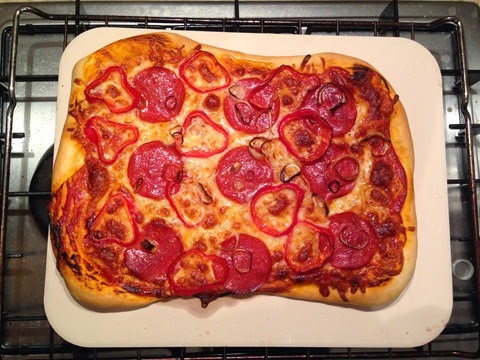 
I had a lot of chorizo in the fridge that had been hanging around for a long time. So, I’ve been looking at ways to use it up. Leigh’s Naga/Ghost chilli plant had also produced tons of chillis that we harvested and froze in January. So, a Jambalaya seemed a good idea to use up chorizo and chilli!

I used this BBC Good Food recipe that I tweaked depending on what ingredients I had in. I don’t have any Cajun seasoning so made up my own spice mix with paprika, cayenne pepper and saffron. I made this one time with the recommended red pepper then with peas the second time. It’s a good recipe where it’s easy to substitute ingredients, simple to make and delicious. 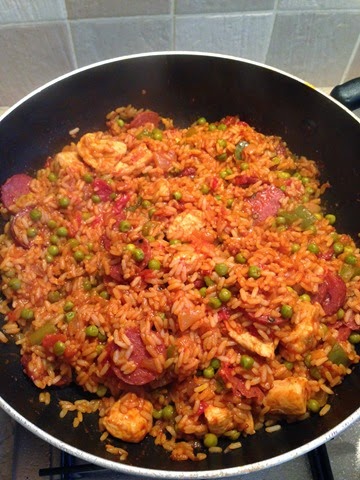 
Since I’ve known Leigh, he’s always made his signature chicken curry and mushroom pilau rice for people. He keeps getting asked for the recipe but has never been able to pass it on. He works between two recipes – madras and a do-piaza – but keeps it all in his head! I’ve made it with him several times before but have to follow his lead.

I’ve been meaning to get him to write down the recipe for a long time and finally managed to on this occasion. It’s a messy scrawl of notes at the moment so I need to get it in order and typed up at some point. But there is now a recipe that can be shared and I can work from on my own if I needed too! 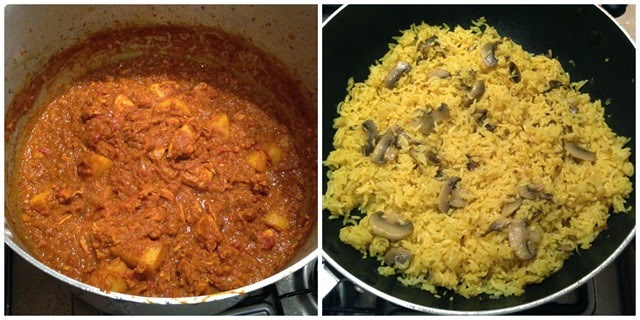 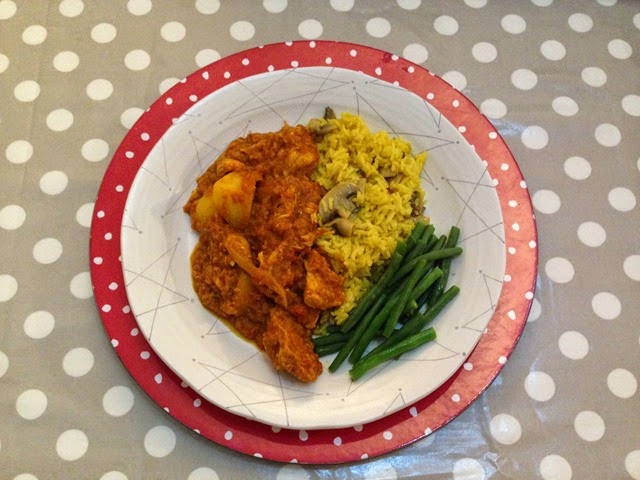 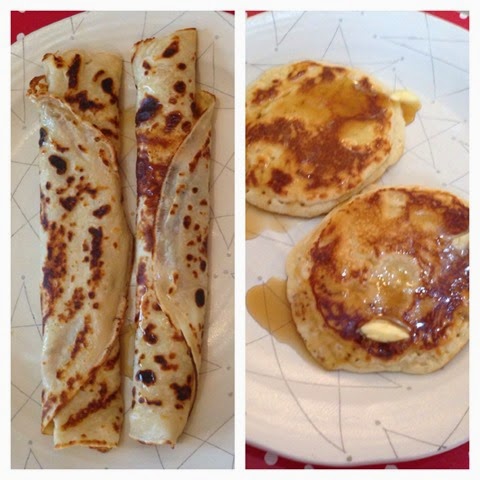 
My dad is a chef and he went round my cousin Carine’s house to give us a Chinese cookery class. We were taught how to prepare a variety of dishes. These included Crispy chicken in Cantonese sauce, White chicken with spring onion/garlic/ginger dipping sauce, Monkfish in a sweetcorn sauce, Chilli salt pork chops, Sweet and sour spare ribs,  and Gai lan with beef. Unpictured dishes were steamed spare ribs and chicken feet in black bean sauce. 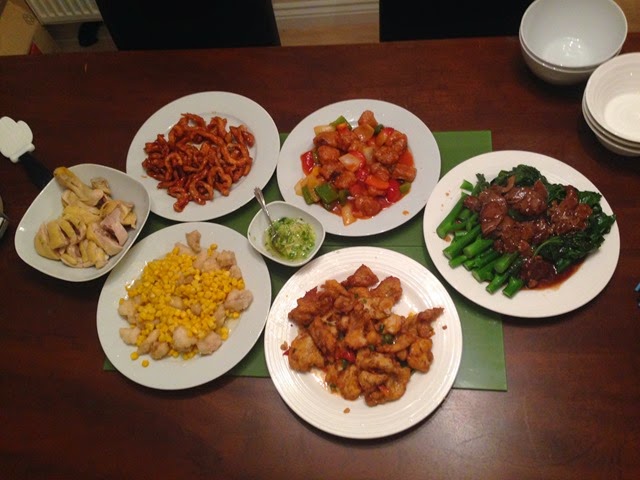 We learnt a lot and everyone (including our partners) enjoyed eating all the food! I’ve since made a few things I learnt from the cookery class. Leigh has especially been enjoying my Chilli salt pork!


Ah, it’s been too long since I made bread. I usually follow a basic bread recipe that I learnt at Doughworks Basic Bread making course a couple of years ago. Sometimes, I've tried other recipes and tend to like Paul Hollywood or Doves Farm recipes. We decided to make a Cottage loaf using a Doves Farm recipe. This had a mixture of brown, malthouse and white bread flours which rose really well. The crumb was soft and the crust chewy. It was so delicious!  I used to make bread once a week/fortnight. I really need to start making bread more often again! 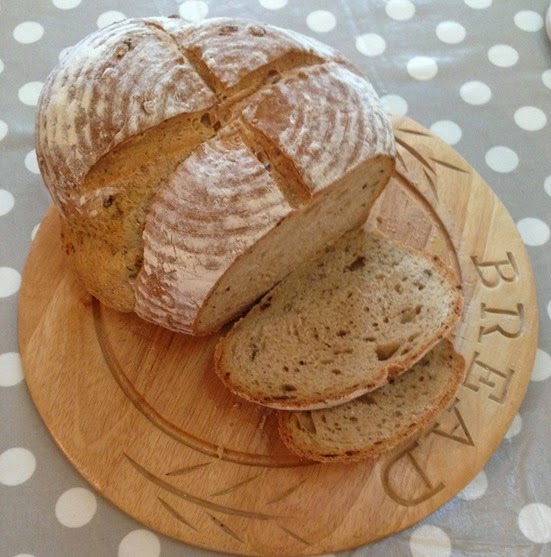 
Of course Valentine’s Day falls in February, so I had to bake something for the occasion. When I think of Halloween, I think of Gingerbread and when i think of Valentine’s, I think of chocolate, in particular, Brownies and Blondies!

I attempted both last year but I undercooked the Brownies and overcooked the Blondies. I thought I would try again this year and the Blondies turned out great. I managed to cook them so they were the right texture – fudgy soft and not like last time’s dry cake. I tried a different recipe for the Brownies – the  Antony Worrall Thompson recipe that my cousin Wesley uses all the time and is always really good. These were a success! Not liquid goo in the middle but the right amount of soft fudgyness. I’ll be using this recipe again. 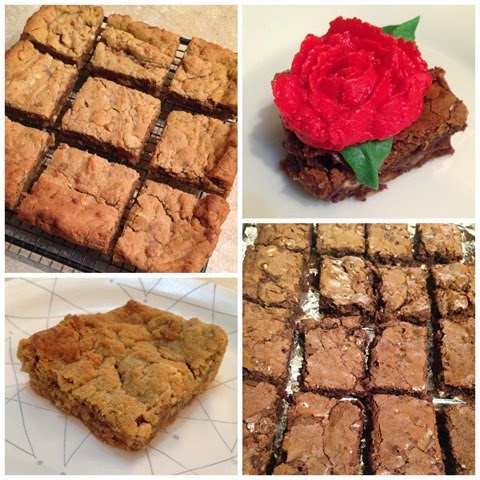 For Valentine’s day, I made Leigh his favourite dessert of mine – Pecan & butterscotch cheesecake with Oreo biscuit base. I only made a mini one as it was for the two of us and decorated it with a heart of tiny fondant roses. This was one of the best times I’ve made this cheesecake – really good! 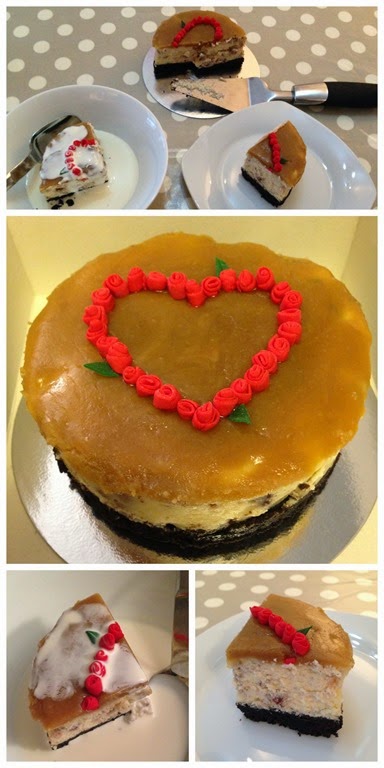 On Valentine’s weekend, I made heart-shaped fruit scones. I normally make these using a round cutter but thought it’d be cute to try a heart shape. I bought Leigh’s favourite (Bonne Maman raspberry) jam and whipped up some cream to accompany them. 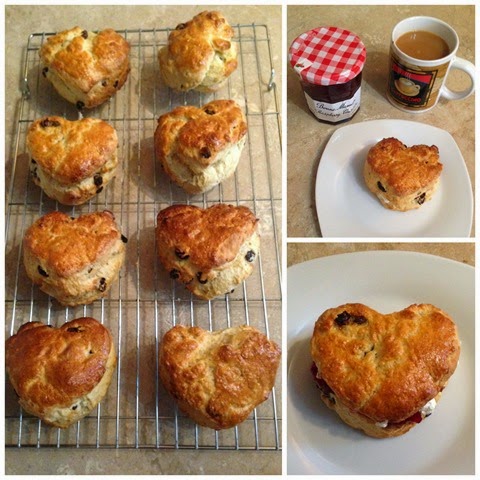 
It’s the year of 30th birthdays this year for my group of school/university friends! Myself and my friend Nic turned 30 at the end of last year (see cake).

And then it was Deb’s turn in February. I made her a Blueberry and lemon birthday cake decorated in the style of Cath Kidson. I enjoyed making this cake. I view these cakes I do for my friends as valuable practice in cake decorating. I need to get better at covering a cake smoothly with buttercream and hopefully will after more practice. I was pleased with my buttercream flowers decoration.

I also continued on the tradition (that has been started since Nic’s birthday last September) of using the same ‘3 0’ candles! I’m hoping they will last all the way through to the last birthday in the summer! 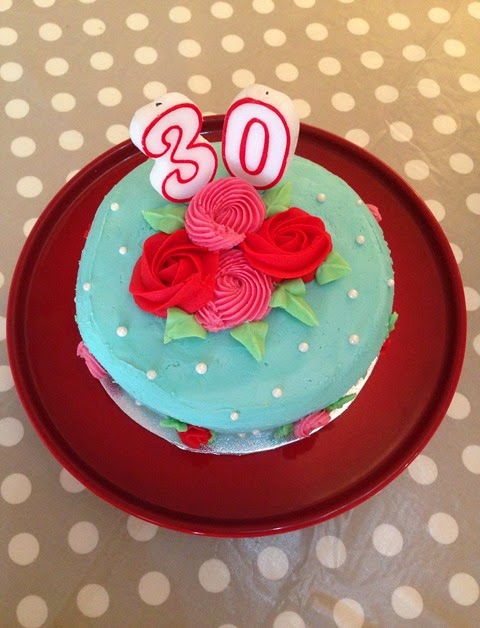 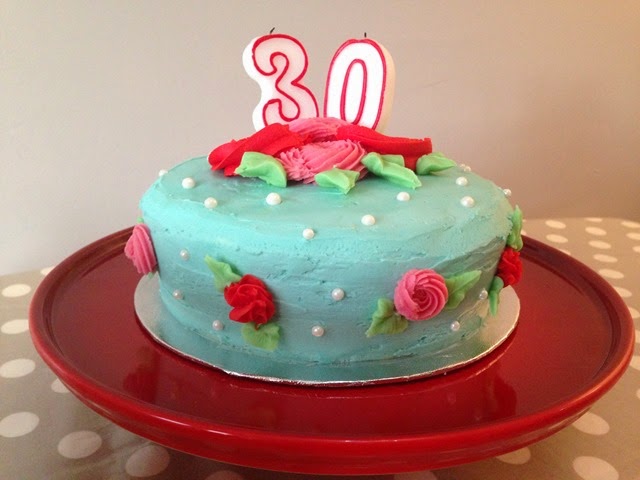 We had a fun night of retro bowling and eating American diner food at Lane 7, Newcastle. Debs was really touched by the cake and everyone was impressed and enjoyed eating it. I have to say, the cake turned out really well and was delicious. *Phew* People said that it looked professional, that it was an improvement from the last one and I just keep on getting better and better! I have the best friends ;-) I even had someone (who doesn’t eat cooked fruit) also liking it!  High praise indeed :-)


I was looking for ways to use up carrots and wanted something different from carrot cake. There always seems to be too many in a bag to use up before they’re bad. Anyways, I came across Carrot cake cookies and was intrigued.

I tried two recipes and the major difference in ingredients between the two recipes was the second one has oats. Myself and everyone who tried them preferred the second Cooking Classy recipe. The first recipe were drier, stodgier and was bland in taste. The second recipe were a definite winner – moist, chewy and packed full of flavour.

It really is like eating Carrot cake but in a cookie form! They’re nice on their own but taken to another level when eaten with the cream cheese filling! 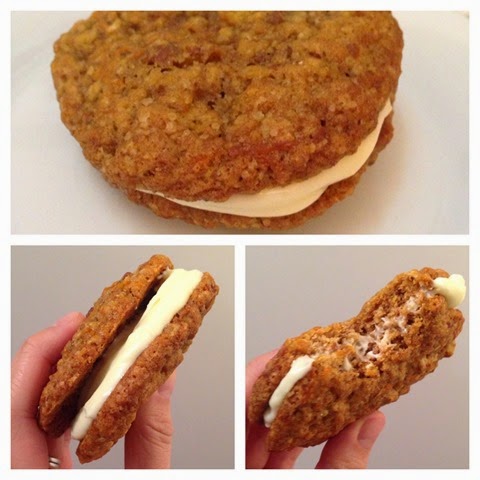 
I had leftover cream cheese frosting from making the Carrot cake cookies. I decided to make Red velvet cupcakes to use up the frosting. I remember trying to make Red velvet cupcakes for the first time when I started baking about 10 years ago. They were really sour and inedible. I’ve never tried making them since. I thought that I’ve got a bit more experience in baking now, so it was time to give them another go.

I recently bought Lola’s Forever book and really liked the look of their Red velvet cupcakes recipe. Most recipes online use buttermilk and apple cider vinegar, whilst they used only lemon juice as the sour acidic ingredient. I had lemons in the house but none of the other ingredients, so this was perfect. I also remember using buttermilk and apple cider vinegar in the past recipe that didn’t work, so was keen to try a recipe that didn’t use these ingredients (in the hope that it will work!). 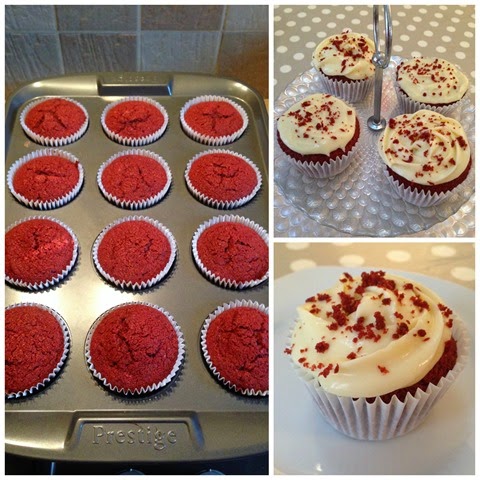 I was really pleased with the look of the cupcakes. Red velvet cake is notoriously difficult to get a red colour sponge due to the brown cocoa and chocolate ingredients. I used Wilton red gel food colouring and achieved a good colour. The cupcakes turned out well too. Light in texture with a subtle chocolate taste. I took them into work and received the loveliest e-mail from the receptionist.

“That was the best cupcake and a first for me (never had a red velvet cake before). You are for sure the Queen of Cakes.”

It’s lovely when people appreciate  your bakes. People can be so kind. It’s the best feeling! :-D
Labels: February round up