I saw that Chinese New Year 2014 fell in between Newcastle restaurant week, so arranged to go to Fat Buddha Asian Bar & Kitchen to celebrate.

I’ve been a few times to Fat Buddha before; at both Durham and the Newcastle one. I did enjoy my food each time but generally find the food to be overpriced for what it is. So, when I saw a half price set menu for Restaurant week, I thought it’d be worth a visit.


I went with Leigh, my cousin Carine and her partner Dave. We all found the surroundings very grand and plush. The service on the other hand, left a lot to be desired. It was very slow in getting a drink; waiting to be asked our order after being seated; waiting for our food; waiting to be asked if we wanted dessert after mains finished; waiting… just a lot of slow service and waiting around!

Anyways, onto the most important thing – the food. Because even if the surroundings and service are amazing - none of that matters if the food is bad. 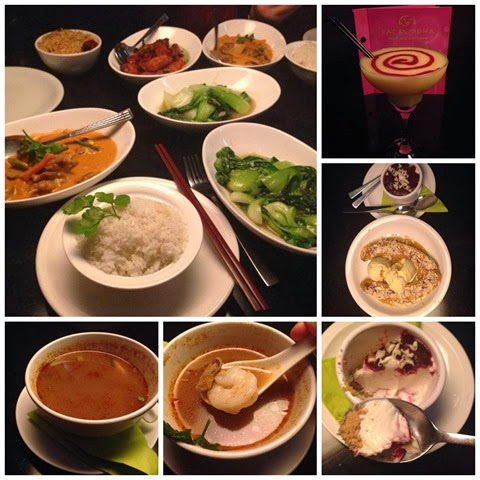 For my drink, I tried a Mango and Passion fruit smoothie. This was alright, though I would have liked more passionfruit syrup for its’ flavour. For those that drink alcohol, Fat Buddha only sell pints of Fosters. Other beers are sold in half-pint glasses which makes them a lot more expensive.


The set menu consisted of a starter (choice of 4 soups) and a main (choice of 4 meat dishes). Between the four of us, we tried all 4 soups. Carine’s chicken & sweetcorn soup was bland and below-average. Dave’s Thai tom yam chicken soup apparently contained ‘fresh hand-pulled shredded chicken’ but didn’t find the chicken to be fresh. I went for the Thai tom yam prawn soup where the prawns were big and tasty. However, I found the soup unpleasant to eat as there were these little hard clear rings that looked like elastic bands. This was bewildering, as they had no flavour, so I have no idea what they were doing in the soup. Neither did the waiter when I asked him. Leigh’s Chinese hot and sour soup was probably the best out the lot, but no good for anyone who doesn’t like the taste of hot and sour.


General consensus of the starter was poor. It seems a cop-out to be doing soups, and not good soup at that, for a starter. I know that they do decent starters that would prove more popular and enjoyable. For example, spring rolls or chicken skewers. These wouldn’t be that hard or costly to do for a set menu. They chose to do soups, as this is the cheapest and easiest thing to do. For the price of the set menu (which I’ll go onto later), it isn’t worth it for a) getting a soup for a starter and b) getting a poor quality soup for a starter.

Three of us got the Thai red curry with beef for our main, and one got the Honey chili chicken (their “most popular dish"). The main came with a side of rice/potatoes/noodles. I got the coconut rice, which was tasty. We also paid extra for two sides of Wok-fried Asian pak choi with crispy garlic. This was done well, and would not be out of place at an authentic Chinese restaurant. I was a bit disappointed that there was no ‘crispy’ garlic bits to be found. We found the beef curry nice, but were especially surprised and taken with the chicken dish. This was really good! I can see how this is their most popular dish. Deservedly so.


We probably should have stopped at the set menu of starter and main. But me and Carine fancied a dessert. We shared a Thai bananas with caramelized cream and dulce de leche and a Mascarpone ice cream with a digestive base, berry sauce and white chocolate curls in a terracotta pot. We were left feeling ‘cold’ by our desserts. Both were underwhelming and over-priced. We wished we never bothered.


Was our meal at Fat Buddha worth it? It cost £10 for two courses (starter and main with a side), where normally (outside of Restaurant Week) it would cost £19.90. I wouldn't have liked to pay full price for our set menu. Seems like people are being robbed when they do! You can pay a lot less per head for better and more variety of Chinese food at a Chinese restaurant that serves authentic Chinese food (there are a few in town). I think the success of this restaurant chain is down to its decor/style; and it seems to appeal to English tastes. If the food was half the price, I think it would be better value for money. Fat Buddha would do even better and attract more people. I wouldn't choose to visit here again unless there was a half price offer on!
Labels: asian Chinese food chinese new year fat buddha newcastle restaurant restaurant week review thai food